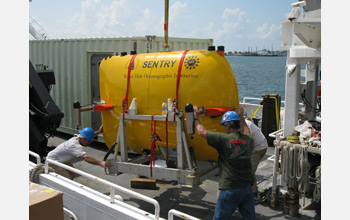 To characterize subsurface oil plumes in the Gulf using novel technology and the latest in biogeochemical techniques, a team of scientists from the Woods Hole Oceanographic Institution (WHOI) embarked on June 17 for a 12-day research effort in the Gulf of Mexico.

Aboard the research vessel (R/V) Endeavor, they are conducting projects funded through the National Science Foundation (NSF)'s rapid response program.

The research should help answer questions about the fate of oil released into the water, examining the physical extent, chemical composition and biological impact of subsea plumes.

"The project has been implemented in a remarkably short period of time, deploying some of the most advanced technology available for underwater chemical sampling, and underwater autonomous vehicles," said Phillip Taylor, acting director of NSF's Division of Ocean Sciences.

"The effort is another example of research scientists stepping up quickly to address the crucial and challenging questions about the fate and environmental consequences of the spilled oil."

Four WHOI scientists will focus on different but complementary problems associated with the oil spill.

TETHYS is capable of identifying minute quantities of petroleum and other chemical compounds in seawater instantly.

"Our effort draws upon the excellent work of many scientists and researchers throughout the country," said Camilli.

"We have studied archived oil spill reports stretching back more than 40 years, and have received data and advice from colleagues at other institutions who have recently surveyed the site.

"Our team will build on their results using our own unique scientific tools to better understand the spill's extent, composition and impact."

WHOI scientist Dana Yoerger, a robotic vehicle specialist and a principal developer of the autonomous underwater vehicle (AUV) Sentry (supported through a grant by NSF), has been working closely with Camilli to integrate TETHYS into Sentry as a payload sensor, enabling chemical measurements to be used as a guidance system for the vehicle.

"The TETHYS payload on Sentry can be used to efficiently track plumes in the water column," said Camilli, "not only to define their shape, but to 'fingerprint' the individual chemicals within the plume."

The data they collect will be used by colleagues Chris Reddy and Ben Van Mooy, two WHOI chemists who are studying how oil degrades over time, its distance from the source and how much is degraded by microbes.

Armed with data collected by TETHYS and Sentry, the chemists will be better able to determine where to make important measurements using a CTD water sampler.

"TETHYS tells me where to invest time," said Reddy.

"I'll look at the map and decide where to take samples that will help answer lots of questions about the plume, such as: 'Has it changed in the middle?' 'Has it changed at the edges?' 'Is it mixing inside?' and 'Why is it changing?'"

Addressing such questions can help scientists understand the wide range of processes that may act on oil in the ocean.

The samples will help Van Mooy piece together how much of the oil is being eaten by microbes.

"Natural microbial degradation plays an important role in the remediation of crude oil released into the ocean," he said.

"Yet microbes cannot survive on oil alone; they need nutrients from the water to grow and degrade the oil."

Nutrients are thought to be scarce in surface waters, while by contrast, nutrients are likely to be abundant within the subsurface plume.

"Work conducted during the past Ixtoc disaster showed very clearly that nutrients played a huge role in regulating the extent of oil degradation," said Van Mooy.

Understanding microbes' ability to break down oil from this spill, and the role that specific nutrients play in that ability, could partially determine how long the oil will remain in the environment.

It also could point to novel remediation strategies.

The powerful combination of robotics, advanced sensors and enhanced programming represents a novel approach to this kind of science.

Camilli and Reddy call it the "hunter-gatherer" approach, where Sentry hunts for oil in the water and then the scientists use the CTD to gather appropriate samples.

All told, the information will help tell the story of what has happened to the oil as it is released into the water a mile below the surface.

"It's like balancing your checkbook," Reddy said. "This much evaporated, this much biodegraded, this much dissolved into the water. We hope to track where all the compounds went."

The team will share the information it collects with colleagues to help guide future sampling by other researchers who don't have this technology.

"Oceanographers usually have a year or more to prepare for an expedition of this magnitude, but these are extraordinary times," said Camilli. "We have gone from a concept to operational state in less than two weeks.

"It is a great credit to the National Science Foundation, University of Rhode Island, numerous federal agencies, our colleagues at WHOI and elsewhere, all working in high gear to make this expedition successful."

For more on the RAPID program, please see the RAPID guidelines.  See also a regularly updated list of RAPIDs targeting the Gulf oil spill response. Because RAPID grants are being awarded continuously, media can also contact Josh Chamot (jchamot@nsf.gov) in the Office of Legislative and Public Affairs for the latest information on granted awards.