Frog Killer Caught in the Act 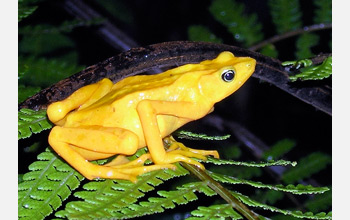 The Panamanian golden frog has declined by 88 percent from the disease.

A killer has been caught in the act: the first before-and-after view of an infectious disease that led to an amphibian die-off has been released by the scientists who tracked it.

Like a wave, incidence of the fungal disease that wipes out Central American frogs--chytridiomycosis--advances through the region's highlands at a rate of about 30 kilometers per year.

After the disappearance of Costa Rica's golden frogs in the 1980s, Karen Lips, a biologist at the University of Maryland, established a monitoring program at untouched sites in neighboring Panama.

Of the 63 species she identified during surveys conducted from 1998 to 2004 in Omar Torrijos National Park, located in El Copé, Panama, 25 species disappeared from the site in a subsequent epidemic.

As of 2008, none of these species had reappeared.

Were there additional species in the park not previously known to science?

To find out, the authors used a genetic technique called DNA barcoding to estimate that another 11 unnamed or "candidate" species were also present.

Combining field research and genetic information, the authors discovered that five of these unnamed species were also wiped out.

"Frog and salamander extinction due to the chytrid fungus is increasing worldwide," says Sam Scheiner, program director in the National Science Foundation (NSF)'s Division of Environmental Biology, which funded the research.

"These methods will allow a rapid measure of their diversity, so that we can monitor, and possibly mitigate, that extinction."

"It's sadly ironic that we are discovering new species nearly as fast as we're losing them," says Andrew Crawford, former postdoctoral fellow at the Smithsonian Tropical Research Institute (STRI) and member of the Círculo Herpetológico de Panamá, now at the University of the Andes in Colombia.

"Our DNA barcode data reveal new species even at this relatively well-studied site, yet the field sampling shows that many of these species new to science are already gone."

An epidemic that wipes out a whole group of organisms is like the fire that burned the famous library of Alexandria, the scientists say.

It destroys a huge amount of accumulated information about how life has coped with change in the past.

"It's similar to the extinction of the dinosaurs. The areas where the disease has passed through are like graveyards. There's a void to be filled--and we don't know what will happen."

"This is the first time that we've used genetic barcodes--DNA sequences unique to each living organism--to characterize an entire amphibian community," said Eldredge Bermingham, STRI director and a co-author of the paper.

"The before-and-after approach we took with these frogs tells us exactly what was lost to this deadly disease--33 percent of their evolutionary history."

The Bay and Paul Foundation also funded the field work for the study. Collection permits were provided by Panama's Environmental Authority, ANAM.