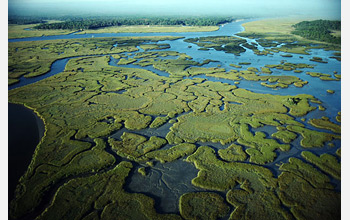 With its vast 1.5 million acres of mangrove swamps, sawgrass prairies and subtropical jungles, could the Florida Everglades--the famous river of grass--be affected by the Gulf oil spill?

While current estimates are that little if any oil entered the Loop Current or reached the Everglades, this area is a significant national natural resource, and to study the effects of the spill on seagrasses and mangrove forests in and near the Everglades, the National Science Foundation (NSF) has awarded a rapid response grant to scientists affiliated with NSF's Florida Coastal Everglades Long-Term Ecological Research (LTER) site."

The area is one of 26 such NSF LTER sites around the world.

"This research will document the extent of the spill's impact on the Everglades ecosystem as a whole."

In south Florida, open water, seagrass, and mangrove habitats could receive large amounts of oil and dispersants from the spill, says James Fourqurean of Florida International University (FIU), who was awarded the grant along with Evelyn Gaiser of FIU.

"Oil and dispersants are toxic to marine plants like seagrasses," says Fourqurean, "and mangroves may be smothered and die if oil slicks wash ashore."

The animals that live in these highly productive, diverse ecosystems are also sensitive to toxic compounds in oil and dispersants.

"Significant oil reaching the Everglades could drastically alter marine animal and plant distributions, the structure of the food web, and the cycling of organic matter for years or decades after the spill," says Fourqurean.

In their NSF-funded study, Fourqurean and Gaiser will measure hydrocarbon concentrations and food web structure at sites that may be directly impacted by the oil spill, and assess how these factors change with the arrival of oil.

"Ecosystem disturbances due to the oil and dispersants would be difficult to definitively discern," she says, "without an understanding of long-term variability in the system uniquely provided by the LTER program."

The research will also help determine how these compounds influence the food webs that support the economic and cultural infrastructure of the south Florida region, says Fourqurean.