Dust-on-snow: on spring winds, something wicked this way comes 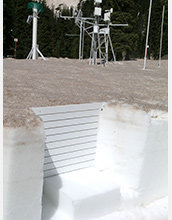 Watch a video of the snow research in action.

On spring winds, something wicked this way comes--at least for the mountains of the Colorado River Basin and their ecosystems, and for people who depend on snowmelt from these mountains as a regional source of water.

"More than 80 percent of sunlight falling on fresh snow is reflected back to space," says scientist Tom Painter of the Jet Propulsion Laboratory in Pasadena, Calif., and the University of California at Los Angeles. "But sprinkle some dark particles on the snow and that number drops dramatically."

The darker dust absorbs sunlight, reducing the amount of reflected light and in turn warming the now "dirty" snow surface.

The result? Dust-on-snow events, as they're called.

That's exactly what's happening in the Colorado River Basin, according to research results published in this week's (Sept. 20, 2010) issue of the journal Proceedings of the National Academy of Sciences (PNAS).

Paper co-authors are Painter; Jeffrey Deems of the National Snow and Ice Center in Boulder, Colo.; Jayne Belnap at the U.S. Geological Survey Southwest Biological Center in Moab, Utah; Alan Hamlet of the University of Washington; Christopher Landry of the Center for Snow and Avalanche Studies in Silverton, Colo.; and Bradley Udall of the University of Colorado-NOAA Western Water Assessment.

When the winds are right and the desert is dry, dust blows eastward from the semi-arid regions of the U.S. Southwest. In a dust-up, Western style, small dark particles of the dust fall on the mountains' white snowfields, ultimately affecting the entire Colorado River watershed.

While dust has always blown into these mountains, the expansion of grazing and other disturbances in the western U.S. in the mid-to-late 1800s led to a five- to seven-fold increase in dust loading. The snow cover became darker and lasted less long.

Lee's Ferry, Arizona, is the dividing line between the upper and lower Colorado River Basins.

There, according to Painter and colleagues, peak spring runoff from the Colorado River occurs an average of three weeks earlier due to the more recent five-fold increase in such dust.

Total annual runoff at Lee's Ferry--and the Colorado River Basin as a whole--has been reduced by about five percent per year.

"These researchers have brought together their collective expertise to provide a historical context for how the Colorado River and its runoff respond to dust deposition on snow," says Anjuli Bamzai, program director in the National Science Foundation's (NSF) Division of Atmospheric and Geospace Sciences, which funded the research.

"The work lays the foundation for future sound water resource management of a river that serves 27 million people in seven states and two countries," she says.

Runoff from the Colorado River Basin has decreased by more than 35 billion cubic feet due to airborne dust, according to Painter.

"Lake sediments in the mountains indicate that the increased dust load came after the vast increases in grazing and agriculture in the deserts of the southwest U.S. in the late 1800s."

The snow cover, Painter says, is therefore much darker in spring than it was at that time, and melts away several weeks earlier.

"Runoff comes from the mountains in a more compressed period, which makes water management more difficult than if the water came more slowly out of the mountains."

Evaporation and sublimation of the warmer snow itself--then transpiration from the earlier-exposed vegetation--results in water losses to the atmosphere, losses that then don't go into runoff.

The lake sediments indicate that the Taylor Grazing Act of the 1930s reduced dust loading from six to seven times greater than normal, down to five times greater.

"It appears that more focus on reducing dust could be effective," says Painter, "and in turn sustain the mountain reservoir system of snow cover, potentially increase the runoff, and counter the regional effects of climate change."

Dust-on-snow events had been little understood despite frequent and regionally extensive dust deposition.

Although scientists knew from theory and modeling studies that this dust changed the albedo--the solar energy reflectance properties--of snowfields, no one had made measurements of its full impact on snowmelt rates.

Painter and colleagues are the first to make systematic measurements of dust-on-snow events along with complementary climate and hydrologic data.

"These observations have confirmed--and most importantly quantified--what many snow and climate scientists had hypothesized but only tested in models," says Jay Fein, program director in NSF's Division of Atmospheric and Geospace Sciences.

Stabilizing soils and minimizing activities that create soil disturbances could decrease dust emissions and runoff losses in the near-term.

Among other benefits, longer snow cover duration, Painter says, could reduce the need for additional reservoir storage of water supplies.

Peak runoff under "cleaner" conditions (less dust-on-snow) would then come later in summer when agricultural and other water demands are greater, says Landry.

The story does have a silver lining. If changes are made in the way desert soils are managed and dust emission is reduced, it could ease tensions over the water in the entire Colorado River Basin.

And the Colorado River needs all the melt it can get.