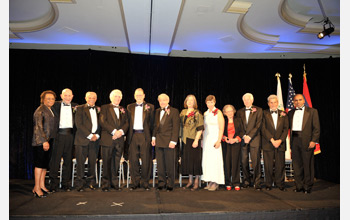 On November 17th, President Obama presented 10 researchers with the highest technical and scientific award given by the United States, the the National Medal of Science.

"The achievements of these men and women stand as testament to their ingenuity, to their zeal for discovery and for their willingness to give of themselves and to sacrifice in order to expand the reach of human understanding," the President said at a ceremony at the White House on Wednesday evening. "The scientists and innovators here have saved lives, improved our health and well being, helped unleash whole new industries and millions of jobs, transformed the way we work, learn and communicate ... their contributions serve as proof not only to their creativity and skill, but to the promise of science itself."

The National Medal of Science was created by statute in 1959, and is administered for the White House by the National Science Foundation (NSF). Awarded annually, the medal recognizes individuals who have made outstanding contributions to science and engineering. Nominees are selected by a committee of presidential appointees based on their advanced knowledge in, and contributions to, the biological, behavioral/social and physical sciences, as well as chemistry, engineering, computing and mathematics.

NSF Director Subra Suresh addressed the laureates at a black tie awards dinner that followed the formal ceremony at the White House. "Tonight we acknowledge not only the heritage that you received and have carried on, but even more so, we celebrate the legacy that you bestow to coming generations of explorers, discoverers, inventors, and innovators," said Suresh. "You feed our anticipation of continued contributions and leadership. And, we look forward to the future flowering of science and innovation in your hands and in the hearts and minds of those you mentor and train ... To put the minds and the hands of humanity to work in creating a better world for all."

On its 51st anniversary, this year's National Medal of Science recipients are:

Yakir Aharonov, Chapman University, for his work in quantum physics, which ranges from the Aharonov-Bohm effect, to the notion of weak measurement, making him one of the most influential figures in modern physics.

Marye Anne Fox, University of California, San Diego, for seminal contributions to chemistry by elucidating the role that non-homogeneous environments can exert on excited-state processes, and enhancing our understanding of charge-transfer reactions and their application to such fields as polymers, solar energy conversion and nanotechnology.