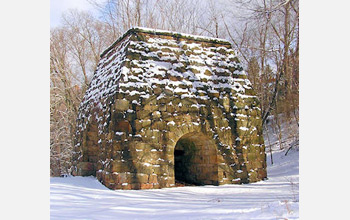 Iron furnaces in Pennsylvania, like this one in Ligonier Valley, may have left a legacy in soils.

Iron furnaces that once dotted central Pennsylvania may have left a legacy of manganese-enriched soils, according to findings reported this week in the journal Environmental Science & Technology (ES&T).

This manganese can be toxic to trees, especially sugar maples and other vegetation, say geoscientists funded by the National Science Foundation (NSF).

The research, which quantified the amounts of manganese in soil core samples, was part of work done at the Shale Hills Critical Zone Observatory (CZO), one of six such CZOs across the U.S. supported by NSF.

"Critical Zone Observatories are natural laboratories for investigating the processes that occur at and near the Earth's surface, and that are affected by freshwater," said Enriqueta Barrera, program director in NSF's Division of Earth Sciences, which funds the NSF CZOs.

"These interconnected processes leave their mark on everything from the production of soil to the evolution of ecosystems. This study, for example, reveals that a significant amount of manganese from human sources affected soils in Pennsylvania."

"Our focus was to study the soil chemistry in Shales Hills," said Elizabeth Herndon, the ES&T paper's lead author and a graduate student in the geosciences at Penn State University. "We saw excess manganese in the soil and decided that we needed to quantify the manganese and determine where it came from."

Typically, manganese in soils comes from the disintegration of the bedrock as soil forms. Bedrock in this area is shale, with the average amount of manganese in the shale about 800 parts per million.

However, the researchers found 14,000 parts per million of manganese in some of the soil samples. This is more than 17 times as much manganese as in the bedrock.

The researchers sampled 21 sites along a ridge at Shale Hills, coring from the surface down to bedrock.

At 20 of the sites they found elevated manganese. The core samples, which are about 12 inches long, encompass about 7,000 years of soil formation.

"We needed to quantify how much extra manganese there was in the samples," said Herndon. "While soil formation puts manganese into the soil, chemical weathering and physical erosion remove manganese from the soil, so we used a mass balance model to account for these inputs and outputs."

The researchers found that 53 percent of manganese in ridge soils can be attributed to atmospheric deposition from anthropogenic sources.

"Because the amount of manganese in the soil was highest near the surface, the added manganese was very likely from industrial pollution," said Herndon.

This area of central Pennsylvania was the site of numerous iron furnaces as far back as the late 1700s.  While some furnaces stayed in operation into the 20th century, most were abandoned by the 1860s.

But the legacy of the ores and fuels they burned remains in the soil.

Although the scientists, including Herndon, Lixin Jin, postdoctoral fellow in geosciences at Penn State, and Susan Brantley, director of the Penn State Earth and Environmental Systems Institute, knew there was added manganese, they needed to show that the element came from industry.

They looked at a location near a steel mill in Mifflin County, Pa., and found a similar pattern of manganese concentrations in the soil, suggesting that the steel mill was the source of the manganese.

They also examined datasets for soils across the U.S. and Europe, and found that a majority of these soils have excess manganese. This may indicate that manganese pollution isn't just a local phenomenon, but could be widespread throughout industrialized areas.

"This watershed led us to discover the story of 200 years of manganese emissions in Pennsylvania, which in turn led us to see the same story that's recorded nationally and in Europe in industrial areas," said Brantley. "Soils are like books that record humans' history of pollution."

Because manganese is naturally found in soils and is readily taken up and cycled by trees, the researchers investigated whether the pattern of manganese deposition matched that of areas where trees manipulated the manganese.

In those cases, trees remove manganese from deep in the soil, creating deficits near the bedrock, and concentrate the manganese near the surface.

According to Herndon, the manganese pattern did not show a depletion near bedrock--so the case for industrial pollution was strengthened.

Manganese is an exceptionally reactive element and is considered toxic if inhaled, but its presence in the soil, where it occurs naturally and is less likely to be inhaled, is not usually a danger to humans.

Trees, however, may be adversely affected. While sugar maples may be harmed if they have a manganese deficiency, too much manganese can be toxic, especially for saplings.

High levels of manganese can also damage other vegetation and crops.

"Manganese oxides could also change the chemical properties of the soil," said Herndon.

"Even if the sources of manganese pollution are no longer active," she said, "the remnants remain in the soil.  We need to consider the kinds of contamination left over from the past that might impact us today."