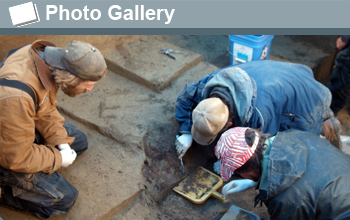 See the research in action in this photo gallery.

Newly excavated remains found at the Xaasaa Na' archaeological site near the Tanana River in central Alaska may belong to one of the earliest inhabitants of North America.

The remains of an individual, estimated to be about three-years old at the time of death, may provide rare insights into the burial practices of Ice Age peoples, while shedding new light on their daily lives, according to a paper published Feb. 25 in the journal Science.

Researchers, who named the child Xaasaa Cheege Ts'eniin (pronounced hausau chag ts'eneen), which translates to "Upward Sun River Mouth Child," based on a local native place name, said the remains would be the oldest found in Northern North America, as well as the second youngest Ice Age child on the continent.

The find also is notable because archaeologists and Alaska Natives are working hand-in-hand to insure the excavation and subsequent examination of the child's remains.

Ben Potter, an archaeologist at the University of Alaska Fairbanks, and his colleagues describe in the paper finding the skeletal remains in an ancient fire pit within an equally ancient dwelling near the Tanana River.

Radiocarbon dating of wood at the site indicates the cremation of the child may have taken place roughly 11,500 years ago, when the Bering Land Bridge may still have connected Alaska with Asia.

Initial observations of the teeth indicate the child is biologically affiliated with Native Americans and with Northeast Asians.

"This site reflects many different behaviors never before seen in this part of the world during the last Ice Age, and the preservation and lack of disturbance allows us to explore the life ways of these ancient peoples in new ways," Potter says.

The researchers note both the burial and the house itself are the earliest of their kind known in the North American near-Arctic. They add that discovery of burial sites of this age in North America is very rare; the buried remains of children even more so.

"The discovery of the remains was unexpected," Potter added.

In fact, it was an older occupation at the site--about 13,200 years ago--that first attracted the researchers to the site. Only while investigating this early occupation did the evidence of the burial come to light.

The initial excavation of the site was supported by the National Science Foundation's Office of Polar Programs with funds awarded under the American Recovery and Reinvestment Act.

OPP's Division of Arctic Sciences supports disciplinary, multidisciplinary, and broad, interdisciplinary investigations directed toward both the Arctic as a region of special scientific interest and a region important to global systems.

In the paper, the researchers note that the pit contained not only the child's remains--the researchers estimate less than 20 percent of the skeleton survived the cremation--but also remains of small mammals, birds and fish as well as plant remains. Because the human remains were in the uppermost part of the pit, above the animal remains, the researchers suspect the pit was not originally designed as a grave, but evidence suggests the occupants abandoned the house after the cremation-burial.

Both researchers and tribal leaders agreed that the process of working together on this new find has fostered mutual respect and cooperation between them.

"This exciting, groundbreaking and multi-faceted research is in the best traditions of the research that NSF supports in the Arctic," said Anna Kerttula de Echave, program officer in the NSF Office of Polar Programs who oversees this award. "Equally significant is that the approach taken by the researchers reflects the importance, in modern Arctic science, of collaborating with Native people as full partners in discovery."

Potter and his colleagues' excavation and analysis were sanctioned by the local federally recognized Tribe, Healy Lake Traditional Council and its affiliated regional consortium, Tanana Chiefs Conference (TCC). Through consultation, initiated at the time of the discovery, Healy Lake and TCC support the scientific examination of both the site and the remains themselves.

"I would like to learn everything we can about this individual," said First Chief Joann Polston, of Healy Lake Traditional Council.

TCC President Jerry Isaac added that "This find is especially important to us since it is in our area, but the discovery is so rare that it is of interest for all humanity."

Although burned, some of the child's remains may retain DNA. Isaac intends to have his own DNA compared to the find. Polston would like to expand the opportunity to any Alaska Native in the region.

Based on the stratigraphy--or examination of layers of materials in the fire pit--and other evidence, the researchers describe a possible sequence for how the remains came to be interred at the site.

They hypothesize a small group of people, which included adult females and young children, were foraging in the area in the vicinity of this residential camp, fishing and hunting birds and small mammals.

A pit was dug within a house, used for cooking and/or a means of disposing food debris for weeks or months preceding the death of the child.

The child died and was cremated in the pit.

The pit was likely filled with surrounding soil soon after the body was burned. The house was fairly soon abandoned, they concluded, due to the lack of artifacts found above this fill.

Potter noted the find is significant also because it crosses a number of disciplinary boundaries; the artifacts, features, stratigraphy, preservation, and the human remains. These finds allow for the integration and synthesis of stone tool technology, cultural affiliation, subsistence economy, seasonal use of the landscape, paleoenvironments and climate change at the end of the last Ice Age northern North America.