A Tale of Two Lakes: One Gives Early Warning Signal for Ecosystem Collapse 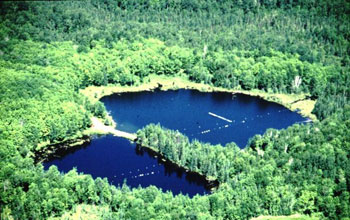 A tale of two lakes: Paul is the smaller lake; Peter, the manipulated lake, is in background.

Researchers eavesdropping on complex signals from a remote Wisconsin lake have detected what they say is an unmistakable warning--a death knell--of the impending collapse of the lake's aquatic ecosystem.

The finding, reported today in the journal Science by a team of researchers led by Stephen Carpenter, an ecologist at the University of Wisconsin-Madison (UW-Madison), is the first experimental evidence that radical change in an ecosystem can be detected in advance, possibly in time to prevent ecological catastrophe.

"For a long time, ecologists thought these changes couldn't be predicted," says Carpenter. "But we've now shown that they can be foreseen. The early warning is clear. It is a strong signal."

The implications of the National Science Foundation (NSF)-supported study are big, says Carpenter.

"This research shows that, with careful monitoring, we can foresee shifts in the structure of ecosystems despite their complexity," agrees Alan Tessier, program director in NSF's Division of Environmental Biology. "The results point the way for ecosystem management to become a predictive science."

The findings suggest that, with the right kind of monitoring, it may be possible to track the vital signs of any ecosystem and intervene in time to prevent what is often irreversible damage to the environment.

"With more work, this could revolutionize ecosystem management," Carpenter says. "The concept has now been validated in a field experiment and the fact that it worked in this lake opens the door to testing it in rangelands, forests and marine ecosystems."

"Networks for long-term ecological observation, such as the [NSF] Long-Term Ecological Research network, increase the possibility of detecting early warnings through comparisons across sites and among regions," the scientists write in their paper.

For humans, ecosystem change can impact economies and livelihoods such as when forests succumb to an insect pest, rangelands to overgrazing, or fisheries to overexploitation.

A vivid example of a collapsed resource is the Atlantic cod fishery.

Once the most abundant and sought-after fish in the North Atlantic, cod stocks collapsed in the 1990s due to overfishing, causing widespread economic hardship in New England and Canada. Now, the ability to detect when an ecosystem is approaching the tipping point could help prevent such calamities.

In the new study, the Wisconsin researchers, collaborating with scientists at the Cary Institute for Ecosystem Studies in Millbrook, N.Y., the University of Virginia in Charlottesville and St. Norbert College in De Pere, Wis., focused their attention on Peter and Paul Lakes, two isolated and undeveloped lakes in northern Wisconsin.

Peter is a six-acre lake whose biota were manipulated for the study and nearby Paul served as a control.

The group led by Carpenter experimentally manipulated Peter Lake over a three-year period by gradually adding predatory largemouth bass to the lake, which was previously dominated by small fish that consumed water fleas, a type of zooplankton.

The purpose, Carpenter notes, was to destabilize the lake's food web to the point where it would become an ecosystem dominated by large predators.

In the process, the researchers expected to see a relatively rapid cascading change in the lake's biological community, one that would affect all its plants and animals in significant ways.

"We start adding these big ferocious fish and almost immediately this instills fear in the other fish," Carpenter says.

"The small fish begin to sense there is trouble and they stop going into the open water and instead hang around the shore and structures, things like sunken logs. They become risk-averse."

The biological upshot, says Carpenter, is that the lake became "water flea heaven."

The system becomes one where the phytoplankton, the preferred food of the lake's water fleas, is highly variable.

"The phytoplankton get hammered and at some point the system snap into a new mode," says Carpenter.

Throughout the lake's three-year manipulation, all its chemical, biological and physical vital signs were continuously monitored to track even the smallest changes that would announce what ecologists call a "regime shift," where an ecosystem undergoes radical and rapid change from one type to another.

It was in these massive sets of data that Carpenter and his colleagues were able to detect the signals of the ecosystem's impending collapse.

Every few decades the insect's populations explode, causing widespread deforestation in boreal forests in Canada. Computer models of a virtual outbreak, however, seemed to undergo odd blips just before the outbreak.

The problem was solved by William "Buz" Brock, a UW-Madison economist who for decades has worked on the mathematical connections of economics and ecology.

Brock utilized a branch of applied mathematics known as bifurcation theory to show that the odd behavior was in fact an early warning of catastrophic change.

In short, he devised a way to sense the transformation of an ecosystem by detecting subtle changes in the system's natural patterns of variability.

The upshot of the Peter Lake field experiment, says Carpenter, is a validated statistical early warning system for ecosystem collapse.

The catch, however, is that for the early warning system to work, intense and continuous monitoring of an ecosystem's chemistry, physical properties and biota are required.

Such an approach may not be practical for every threatened ecosystem, says Carpenter, but he also cites the price of doing nothing.

"These regime shifts tend to be hard to reverse. It is like a runaway train once it gets going and the costs--both ecological and economic--are high."

In addition to Carpenter and Brock, authors of the Science paper include Jonathan Cole of the Cary Institute of Ecosystem Studies; Michael Pace, James Coloso and David Seekell of the University of Virginia at Charlottesville; James Hodgson of St. Norbert College; and Ryan Batt, Tim Cline, James Kitchell, Laura Smith and Brian Weidel of UW-Madison.