Ukraine, Israel, Brazil and the United States are "loose" cultures 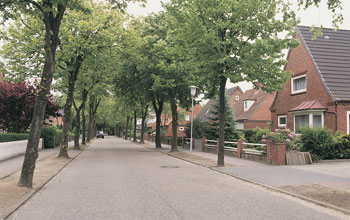 Population density helps determine whether a country is tight or loose as this German street hints.

Conflicts and misunderstandings frequently arise between individuals from different cultures. But what makes cultures different; what makes one more restrictive and another less so?

A new international study led by the University of Maryland and supported by the National Science Foundation's Division of Behavioral and Cognitive Sciences offers insights that may help explain such cultural differences and bridge the gaps between them.

Published in the May 27 issue of the journal Science, the study for the first time assesses the degree to which countries are restrictive versus permissive and it all comes down to factors that shape societal norms.

The researchers found a wide variation in the degree to which various societies impose social norms, enforce conformity and punish anti-social behavior. They also found the more threats experienced by a society, the more likely the society is to be restrictive, the authors say.

"There is less public dissent in tight cultures," said University of Maryland Psychology Professor Michele Gelfand, who led the study. "Tight societies require much stronger norms and are much less tolerant of behavior that violates norms."

"Is important, within our view, to be mindful that we don't think that either culture is worse or better," said Gelfand.

She and her colleagues examined cultural variation in both types of societies.

"We believe this knowledge about how tight or loose a country is and why it is that way can foster greater cross-cultural tolerance and understanding," said Gelfand. "Such understanding is critical in a world where both global interdependence and global threats are increasing."

The researchers surveyed 6,823 respondents in 33 nations. In each nation, individuals from a wide range of occupations, as well as university students, were included. Data on environmental and historical threats and on societal institutions were collected from numerous established databases. Historical data--population density in 1500, history of conflict over the last hundred years, historical prevalence of disease outbreaks--were included whenever possible, and data on a wide range of societal institutions, including government, media and criminal justice, were obtained.

"You can see tightness reflected in the response in Japan to the natural disasters recently," said Gelfand referring to the massive earthquake and tsunami that hit the country on March 11 of this year.

"The order and social coordination after the event, we believe, is a function of the tightness of the society," Gelfand said, noting that tightness is needed in Japan to face these kinds of ecological vulnerabilities.

The research further showed that a nation's tightness or looseness is in part determined by the environmental and human factors that have shaped a nation's history--including wars, natural disasters, disease outbreaks, population density and scarcity of natural resources.

Tight and loose societies also vary in their institutions, with tight societies having more autocratic governments, more closed media and criminal justice systems that have more monitoring and greater deterrence of crime as compared to loose societies.

The study found that the situations that people encounter differ in tight and loose societies. For example, everyday situations--like being in a park, a classroom, the movies, a bus, at job interviews, restaurants and even one's bedroom--constrain behavior much more in tight societies and afford a wider range of behavior in loose societies.

These attributes, Gelfand said, help people to adapt to the level of constraint, or latitude, in their cultural context, and at the same time, reinforce it.

The research team combined all these measures in a multi-level model that shows how tight and loose systems are developed and maintained.

Gelfand said knowledge about these cultural differences can be invaluable to many people--from diplomats and global managers to military personal, immigrants and travelers--who have to traverse the tight-loose divide.