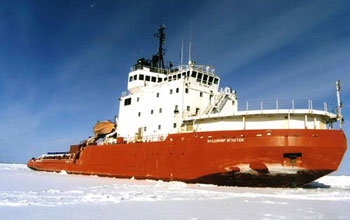 Russian icebreaker that will create a channel to support two U.S. stations in Antarctica.

The National Science Foundation (NSF) today announced it has reached an agreement with a Russian company to charter a diesel icebreaker to create a channel through the sea ice of Antarctica's McMurdo Sound that will allow the annual refueling and resupply of two U.S. stations in Antarctica.

NSF has signed a one-year contract, with an option for additional years, with the Murmansk Shipping Company to use the Canadian-built icebreaker, Vladimir Ignatyuk, to create a channel into NSF's McMurdo Station and to escort resupply and refueling ships.

The refueling and resupply are critical to the Presidentially mandated mission of the U.S. Antarctic Program--which NSF manages--to maintain an active and influential national presence on the southernmost continent, by supporting a comprehensive science program and operating three year-round research stations. Delivery of fuel and supplies is critical to two of those three stations, in particular: McMurdo, on Ross Island and Amundsen-Scott South Pole.

Without the annual resupply mission--and in particular the delivery every year of roughly 5 million gallons of fuel to support each year's activities--the science mission would have to be severely curtailed.

Earlier this summer, the Swedish government announced that it would not, as it has done in previous years, be able to allow NSF to use its icebreaker, Oden, to escort the annual resupply and refueling missions.

NSF officials, working with officials in the White House Office of Science and Technology Policy, the State Department, and the U.S. Coast Guard, have since been actively pursuing alternatives to Oden in the wake of the Swedish government's announcement.