A Call to Arms for Synthetic Biology

Scientists have synthesized from scratch a so-called chromosome "arm"--one of the largest DNA molecules ever synthesized, and developed a new method for shuffling an organism's genetic deck 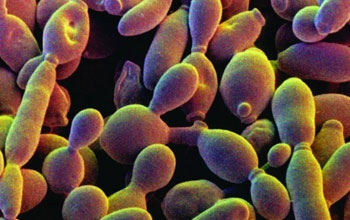 Scientists have replaced all of the DNA in the arm of a yeast chromosome with computer-designed, synthetically produced DNA that is structurally distinct from its original DNA to produce a healthy yeast cell. (Yeast chromosomes are often depicted as bow tie-shaped--with each chromosome bearing two "arms" that are positioned similarly to the two sides of a bow tie.)

These results confirm that large pieces of DNA can be synthesized and inserted into a chromosome, and validate the research team's principles for designing synthetic chromosomes. Further, the researchers report a method for changing the structure of the synthetic DNA, a process called "scrambling," which could be applied to other organisms in addition to yeast.

In addition, the successful synthesis and scrambling of the DNA in the chromosome arm represents a significant step towards the researchers' ultimate goal of synthesizing all of a yeast cell's DNA to confer desired traits on the yeast--an achievement that would likely yield many societal benefits and basic insights about which DNA structural arrangements are possible and compatible with life.

This research, which was funded by the National Science Foundation (NSF), is described in this week's issue of Nature.

The first step of this research was to produce so-called semi-synthetic DNA according to a computer-generated blueprint for the sequence of nucleotides, which are the building blocks of DNA. Then, the resulting semi-synthetic DNA was used to replace the desired chromosome arm of a yeast cell without impacting its health. "The yeast that underwent this process were indistinguishable in their growth properties from the native yeast," says Jef D. Boeke of Johns Hopkins University School of Medicine--a member of the research team.

Next, the synthesized DNA in the arm was "scrambled;" this process involved adding a chemical to the yeast culture that caused major changes to gene-sized blocks of nucleotides in the synthesized DNA. By scrambling, some genes were lost and the order of other genes was shuffled.

"We were able to track the changes we made relative to the native yeast and isolate scrambled derivatives from the semi-synthetic yeast," said Boeke. "We thereby generated a wide range of different derivatives from the semi-synthetic strain. Some scrambled strains grew as well as the native yeast and some did not." Such variation yielded insights into the relationships between DNA structure and trait expression in yeast.

Nevertheless, thus far only about one percent of the DNA in a yeast cell has been synthesized and scrambled through this research. The research team is currently working towards its long-term goal of synthesizing all 16 yeast chromosomes to order to give the organism desired traits.

"These researchers synthesized the largest eukaryote chromosome fragment to date," said Karen Cone, an NSF program manager. "This work lays the groundwork for being able to synthesize the genome of entire eukaryote organism."

This achievement represents a significant advancement for the field of synthetic biology--an emerging field in biology addressing the design and construction of new biological functions and systems not found in nature. Although researchers at the J. Craig Venter Institute have previously synthesized bacterial chromosomes, yeast chromosomes are larger and more complicated than them and so are more difficult to synthesize.

As Boeke's team continues their work, they are unlikely to go it alone. "One of the reasons why we are so excited about this research is that we are actively seeking partners to continue our work, and we want to disseminate the organism to other researchers who want to work on it," says Boeke.