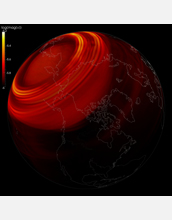 The Texas Advanced Computing Center (TACC) at the University of Texas at Austin today announced that it will deploy and support a world-class supercomputer with comprehensive computing and visualization capabilities for the national open science community.

Made possible by a $27.5 million grant from the National Science Foundation (NSF), this new deployment is part of the NSF "eXtreme Digital" (XD) program, an integrating system for the majority of NSF's high end computational resources made widely available to U.S. researchers.

The new system, "Stampede," will be built by TACC in partnership with Dell and Intel to support the nation's scientists in addressing the most complex scientific and engineering problems. Stampede is anticipated to go into full production in January 2013 and will be available to researchers for four years.

The estimated investment will be more than $50 million over the four year period; the project may be renewed for another system deployed in 2017 which would enable four additional years of open science research.

"Stampede will be one of the most powerful systems in the world and will be uniquely comprehensive in its technological capabilities," said TACC Director Jay Boisseau. "Many researchers will leverage Stampede not only as part of their breakthrough scientific research, but for all of their scientific research, including visualization, data analysis and data-intensive computing. We expect the Stampede system to be an exemplar for supporting both simulation-based science and data-driven science."

When Stampede is deployed in 2013, it will be the most powerful system in the NSF XD environment, currently the most advanced, comprehensive, and robust collection of integrated digital resources and services enabling open science research in the world.

As a critical part of XD, the Extreme Science and Engineering Discovery Environment (XSEDE) consortium, comprising more than a dozen universities and two research laboratories, has now replaced the previous, open scientific computing grid, the TeraGrid, as the integrating fabric for the bulk of NSF's high end digital resources. Stampede will enable researchers from any U.S. open science institution to apply for and use its resources for a variety of novel scientific and educational activities.

"We at NSF are gratified to fund such a powerful combination of system and services for open science research," said Irene Qualters NSF program director for high performance computing. "The technological capacity is important; but even more important is that the scientific community--those on the front lines of cutting edge research on a number of multi-disciplinary areas critical to addressing society's most vexing challenges--have open access in order to push the frontiers of science and engineering."

Computational science has become the third pillar of scientific discovery--complementing theory and physical experimentation--that allows scientists to explore phenomena that are too big, too small, too fast or too dangerous to investigate in the laboratory.

"This new resource will substantially increase the computational capacity that the XD/XSEDE program can deliver to the open science community for leading edge science," said Barry Schneider, NSF program director for cyberinfrastructure. "It is becoming clear that our progress towards treating more complex and larger problems in the physical and biological sciences will depend crucially on advances in computational science which in turn depend on advances in hardware and software. Stampede is a balanced, heterogeneous computational instrument which represents an important if not critical path forward in achieving those goals."

"Stampede will usher forth a new era of computational simulation in which observational and experimental data are assimilated into large-scale models to create better predictions, accompanied by quantified uncertainties," said Omar Ghattas, professor of Geological Sciences and Mechanical Engineering, and director of the Center for Computational Geosciences in the Institute for Computational Engineering and Sciences at The University of Texas at Austin.

"My group, in particular, is excited about the opportunities Stampede offers to greatly accelerate our work in quantifying uncertainties in computer models of dynamics of polar ice sheets, global seismic wave propagation, and whole-earth plate tectonics," he said.

Stampede will support more than a thousand projects in computational and data-driven science and engineering from across the United States. It will also allow researchers to develop advanced methods for petascale computing, including Intel MIC architecture optimization, and will foster new expertise in data-intensive computing.

Stampede also will be used to help train the next generation of researchers in advanced computational science and technology, expanding the use of advanced computing across disciplines and into new communities and domains.

Stampede and the other computational resources of XSEDE are made freely available to researchers across the country through a peer review system. Unlike telescopes or particle accelerators, systems like Stampede help researchers across all disciplines, including the humanities, and are critical to the expansion of knowledge and innovation.