Air Pollution a Culprit in Worsening Drought and Flooding 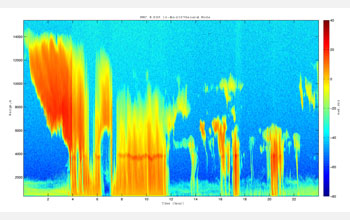 A radar image of clouds; data from a decade of time played an important role in the results.

Increases in air pollution and other particulate matter in the atmosphere can strongly affect cloud development in ways that reduce precipitation in dry regions or seasons.

This while increasing rain, snowfall and the intensity of severe storms in wet regions or seasons, according to results of a new study.

The research provides the first clear evidence of how aerosols--soot, dust and other particulates in the atmosphere--may affect weather and climate.

The findings have important implications for the availability, management and use of water resources in regions across the United States and around the world.

"Using a 10-year dataset of atmospheric measurements, we have uncovered the long-term, net impact of aerosols on cloud height and thickness and the resulting changes in precipitation frequency and intensity," says Zhanqing Li, an atmospheric scientist at the University of Maryland and lead author of a paper reporting the results.

The paper was published today in the journal Nature Geoscience.

"The question is not only important for our understanding of the effects of natural processes and human activities on climate change, but for addressing issues in air pollution, disaster relief, water resource management and human weather modification."

In addition to the scope and timeframe of the research team's observations, the scientists matched their findings with results from a cloud-resolving computer model.

"Understanding interactions among clouds, aerosols and precipitation is one of the grand challenges for climate research in the decade ahead," says Tony Busalacchi, a scientist at the University of Maryland and chair of the Joint Scientific Committee of the World Climate Research Program.

"Findings from this study are a significant advance in our understanding of such processes, with implications for both climate science and sustainable development," says Busalacchi.

"We have known for a long time that aerosols impact both the heating and phase changes [such as condensing and freezing] of clouds, and that they can either inhibit or intensify clouds and precipitation," says Russell Dickerson, an atmospheric scientist at the University of Maryland.

"What we have not been able to determine until now is the net effect," says Dickerson. "This study shows that fine particulate matter, mostly from air pollution, impedes gentle rains while exacerbating severe storms. It adds urgency to the need to control sulfur, nitrogen and hydrocarbon emissions."

According to Steve Ghan of the Pacific Northwest National Laboratory, "This work confirms what previous cloud modeling studies had suggested: that although clouds are influenced by many factors, increasing aerosols enhances the variability of precipitation, suppressing it when precipitation is light and intensifying it when it is strong.

"This complex influence is completely missing from climate models, casting doubt on their ability to simulate the response of precipitation to changes in aerosol pollution."

Aerosols are tiny solid particles or liquid particles suspended in air. They include soot, dust and sulfate particles and are what we commonly think of when we talk about air pollution.

Aerosols come, for example, from the combustion of fossil fuels, from industrial and agricultural processes and from the accidental or deliberate burning of fields and forests.

They can be hazardous to human health and the environment.

The variable cooling and heating that results is, in part, how aerosols modify the stability that dictates atmospheric vertical motion and cloud formation.

Aerosols also affect cloud microphysics because they serve as nuclei around which water droplets or ice particles form.

Both processes can affect cloud properties and rainfall. Different processes may work in harmony or offset each other, leading to complex yet inconclusive interpretations, scientists say, of their long-term net effect.

The mechanisms of climate warming effects of increased greenhouse gases are clear: they trap solar energy absorbed at the Earth's surface and prevent it from being radiated as heat back into space.

The climate effects of increased aerosols are much less certain.

"This study demonstrates the importance and value of keeping a long record of continuous and comprehensive measurements to identify and quantify the important roles of aerosols in climate processes," says Steve Schwartz, a scientist at Brookhaven National Laboratory.

"While the mechanisms for some of these effects remain uncertain, the well-defined relationships discovered demonstrate their significance," says Schwartz. "Controlling for these processes in models remains a future challenge, but this study clearly points to important directions."

"The findings from ground measurements of long-term effects are consistent with the global effects revealed from satellite measurements reported in our separate study," says Li.

"They attest to the needs of tackling the climate and environmental changes that matter so much to our daily lives."