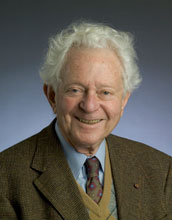 The National Science Board (NSB) announced today that Nobel laureate, Leon Lederman, is the 2012 recipient of its Vannevar Bush Award.

Lederman is a founder and the inaugural resident scholar at the Illinois Mathematics and Science Academy, a three-year residential high school for the gifted. He formerly served as the director of Fermi National Accelerator Laboratory from 1979 to 1989, and is currently director emeritus of the lab. He is also founder and chairman emeritus of the Teachers Academy for Mathematics and Science, which was active in the professional development of primary school teachers in Chicago from 1990 to 2003.

"We will honor Leon Lederman's scientific achievements, visionary leadership, national and international statesmanship and commitment to science education," said NSB Chairman Ray Bowen. "He has contributed enormously to the public understanding of science and the development of science talent. Leon Lederman will join a long list of distinguished recipients of the Vannevar Bush Award."

In making the award, the NSB highlighted Lederman's association with Columbia University for more than thirty years. As both a student and professor, he led an extensive and wide-ranging series of experiments that provided major advances in the understanding of particles and interactions, which contributed significantly to what is known as the "standard model." Lederman received his Ph.D. from Columbia University in 1951. He then joined the Columbia University faculty and eventually became the Eugene Higgins Professor of Physics.

Lederman has served a life-long distinguished career and has been given numerous illustrious recognitions that include the Nobel Prize in Physics in 1988, which he won with Melvin Schwartz and Jack Steinberger "for the neutrino beam method and the demonstration of the doublet structure of the leptons through the discovery of the muon neutrino." Additionally, he won the National Medal of Science in 1965, the Elliot Cresson Medal of the Franklin Institute in 1976, and the Wolfe Prize in Physics in 1982. He also was awarded the Enrico Fermi Prize given by President Clinton in 1993, and the Abelson Prize of the AAAS in 2000 among other honors.

In addition to serving as president and chairman of the American Association for the Advancement of Science, Lederman also served as a founding member of the High Energy Physics Advisory Panel of the U.S. Department of Energy and the International Committee for Future Accelerators, as well as a Commissioner for the White House Fellows and chairman of the State of Illinois Governor's Science Advisory Committee. He also co-chaired the NSB's Commission on 21st Century Education for Science, Technology, Engineering and Mathematics.

Currently, Lederman serves on over a dozen boards and is a life member of the University of Chicago Physical Sciences Visiting Committee. He has received honorary degrees, academic appointments and memberships in over 60 institutions in more than a dozen countries.

Each year, the National Science Board presents the Vannevar Bush Award to truly exceptional, lifelong leaders in science and technology who have made substantial contributions to the welfare of the nation through public service activities in science, technology and public policy.

The award was established in 1980 in memory of Vannevar Bush, who served as science advisor to President Franklin Roosevelt during World War II, helped to establish federal funding for science and engineering as a national priority during peacetime and was behind the creation of the National Science Foundation (NSF).