Where disease-causing microbes have been makes a difference 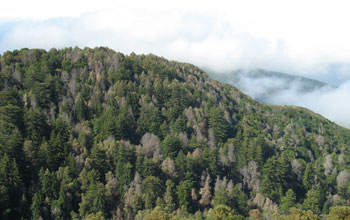 Countless trees in California have been felled by sudden oak death.

The virulence of plant-borne diseases depends on not just the particular strain of a pathogen, but on where the pathogen has been before landing in its host, according to new research results.

Scientists from the University of California System and the U.S. Department of Agriculture's Agricultural Research Service (USDA ARS) published the results today in the journal PLoS ONE.

The study demonstrates that the pattern of gene regulation--how a cell determines which genes it will encode into its structure and how it will encode them--rather than gene make-up alone affects how aggressively a microbe will behave in a plant host.

The pattern of gene regulation is formed by past environments, or by an original host plant from which the pathogen is transmitted.

"If confirmed, this finding could add a key new dimension to how we look at microbes because their history is going to matter--and their history may be hard to reconstruct," said Matteo Garbelotto, an environmental scientist at the University of California, Berkeley and co-author of the paper.

Epigenetic factors--for example, gene regulation mechanisms controlled by diet or exposure to extreme environments--are well-known to affect the susceptibility of humans to some diseases.

The new study is the first to show a similar process for plant pathogens.

"Sudden oak death, for example, is one of many pathogens that seemingly came out of nowhere to ravage the forests of California," said Sam Scheiner, a director of the National Science Foundation's (NSF) Ecology and Evolution of Infectious Diseases (EEID) program, which funded the research.

"This study shows that such sudden emergence can happen through rapid evolution, and may provide clues for predicting future epidemics."

The EEID program is a joint effort of NSF and the National Institutes of Health. At NSF, it is supported by the Directorates for Biological Sciences and Geosciences.

"Our work provides the concrete evidence those hypotheses were correct," he said.

Researchers showed that genetically identical strains of the sudden oak death pathogen isolated from different plant hosts were strikingly different in their virulence and their ability to proliferate.

They also demonstrated that these traits were maintained long after they had been isolated from their hosts.

"We found that an identical strain placed in two different plant hosts will undergo distinct changes that will persistently affect the strain's virulence and fitness," said Takao Kasuga, a molecular geneticist with the USDA ARS and the lead author of the paper.

The implications for disease control are significant.

Scientists say that it may not be enough to know what strain of pathogens they are dealing with in order to make treatment decisions; it also may be necessary to know how the pathogen's genes are being regulated.

This study shows that gene regulation may be the result of the environments the strain inhabited before being identified.

Garbelotto uses a parallel example of a well-known human pathogen: particular strains of the H1N1 flu virus have been identified as highly virulent, so a diagnosis of one of these strains indicates to doctors that they should treat that flu aggressively.

"But, hypothetically, if you caught one of these aggressive strains of H1N1 from a guy that went to, for example, Paris, it could be 10 times more dangerous. You may never know from whom you got it, and it's even less likely that you'll be able to learn where your infector visited before passing the germ on to you."

In plants, Garbelotto said, tracking a pathogen's history may prove even more difficult.

Correct information could give scientists a new weapon to use against virulent strains of diseases like sudden oak death, which can devastate forests and the ecosystems that depend on them.

The researchers also identified two groups of genes that are capable of affecting virulence and whose expression patterns are indicative of the previous host species they inhabited.

Understanding the regulation of these genes may provide scientists with future approaches to control a disease, such as manipulating gene expression to artificially reduce the aggressiveness of plant pathogens.

While Garbelotto stresses that more study is needed, he says if the paper's findings are confirmed, it could influence not just treatment but policy as well.

"Most countries impose regulations on microbes based on their genetic make up--which ones can and can't cross state and international lines and how they must be transported," he said.

"Our findings suggest that when making regulatory policy, we may also need to identify gene expression levels and take into account the history of a microbe."

Co-authors of the paper include Melina Kozanitas and Daniel Huberli, also of UC Berkeley; Mai Bui of the USDA ARS; and David Rizzo, a plant pathologist at University of California, Davis.