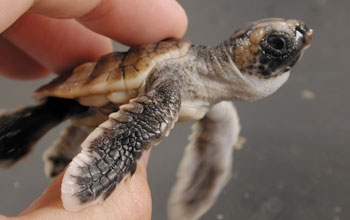 A loggerhead hatchling is shown.

Immediately after emerging from their underground nests on the lush beaches of eastern Florida, loggerhead sea turtles scramble into the sea and embark alone on a migration that takes them around the entire North Atlantic basin. Survivors of this epic migration eventually return to North America's coastal waters.

The most comprehensive perspective to date on precisely how young loggerheads navigate their transoceanic migration was recently published in two complementary papers produced by a research team led by Kenneth J. Lohmann, a marine biologist at the University of North Carolina at Chapel Hill.

How they get there

The team's most recent paper argues that young loggerheads, which begin their migrations as tiny two-inch-long hatchlings, likely advance along their open-sea route through a combination of strategic swimming interspersed with passive drifting on favorable ocean currents. By swimming only in places where they are in danger of being carried off course and drifting passively in other areas where ocean currents move in the same direction that the turtles want to go, young loggerheads can migrate long distances on limited energy stores.

"Young turtles probably rely on a strategy of 'smart swimming' to optimize their energy use during migrations," Lohmann said. "The new results tell us that a surprisingly small amount of directional swimming in just the right places has a profound effect on the migratory paths that turtles follow and on whether they reach habitats favorable for survival."

The research, published in the June 2012 issue of The Journal of Experimental Biology, was partially funded by the National Science Foundation (NSF).

The findings--which were based on computer simulations combining ocean currents and 'virtual turtles' swimming for various period of time--challenge a long-standing belief that young sea turtles drift passively and that their distribution is determined entirely by ocean currents. "Most researchers have assumed that, because ocean currents in some places move faster than young turtles can swim, the turtles cannot control their migratory paths," Lohmann explained. "This study shows otherwise."

"The research team's results have important implications for 'weakly moving animals,' including larval fish, butterflies and ballooning spiderlings," said David Stephens, a program director at NSF. They suggest that even small amounts of effort from these creatures can have big effects on where they end up, and how they get there.

Stephens continued: "All those things that we've thought of as 'just drift along with the current' might, after all, have a lot of control over where they're going, with minimal effort!"

This discovery may be particularly useful in understanding commercially important creatures, such as fish and crab, that have weakly swimming larvae that, like turtles, have often been assumed to drift passively, added Lohmann. An improved understanding of their movements may lead to better fisheries management.

A related paper published last month by Lohmann's team explains how young Florida-hatched loggerheads know where they are and in what direction to steer as they migrate around the North Atlantic basin. The paper, which appears in the April 2012 issue of Current Opinion in Neurobiology and describes research funded by NSF, reports that the turtles are guided at least partly by an inherited "magnetic map."

The Earth's magnetic field differs slightly in different geographic areas. The turtles' magnetic map enables them to instinctively and wondrously use differences in these fields as navigational markers that serve as equivalents to road signs for turtles in the open sea. Each change in the magnetic field elicits a change in the turtle's swimming direction, which in turn steers the turtle along its migratory route at each location.

The new paper summarizes a decade of research in which scientists investigated the turtles' magnetic map, using laboratory experiments in which young loggerheads were exposed to magnetic fields that exist along the natural migratory route. Amazingly, the direction that turtles swam in the lab in response to various magnetic fields matched observations of the steering decisions made by turtles when swimming through comparable magnetic fields in the ocean. The results indicate the turtles' brains are hard-wired to navigate their migratory routes from birth.

"The results also indicate that turtles obtain both latitude and longitude-like information from the oceanic magnetic field," said Stephens. "They may thereby obtain much richer spatial representations from magnetic fields than do humans with their compasses."

Tiny loggerhead hatchings are born small and defenseless, said Dr. Lohmann. Unable yet to make deep dives, they can only swim slowly along the ocean's surface. Their limitations make them easy targets for predatory fish swimming below them and for hungry birds searching out their next meals from above. Such turtle predators are particularly abundant in shallow, coastal areas.

Scientists believe that loggerhead hatchlings attempt to dash from danger-filled coastal zones--in nature's version of a football maneuver known as a "Hail Mary pass"--into the relative safety of the open sea largely to avoid their enemies. Eating and growing in the open ocean where predators are less abundant, the turtles migrate slowly and wait until their larger size reduces their chances of being attacked by coastal predators, before they return to coastal North American waters.

Nevertheless, the odds are still stacked against the survival of any particular loggerhead hatchling. Estimates suggest that only about one in four thousand hatchlings from Florida survives to adulthood.

All species of sea turtles are listed as threatened or endangered. The new research may provide insights that are helpful in conservation, Lohmann said.

For example, different populations of loggerheads around the world are likely to have different magnetic maps, Lohmann explained, with each map specific to a particular migratory pathway in one part of the world. If loggerheads in one geographic area go extinct, it will probably be impossible to replace them with turtles from another area, because the new arrivals will lack the inherited instructions needed to navigate within and from their transplanted homes.

In addition, conditions that impair the functioning of turtles' magnetic sense may jeopardize survival. Lohmann says that in Florida and elsewhere, a common conservation practice is to surround turtle nests on the beach with wire cages to protect the turtle eggs from raccoons. But such cages also distort the local magnetic field, and may thereby compromise the ability of hatchlings to navigate after they emerge from their nests.