Study determines which bat species are headed for trouble 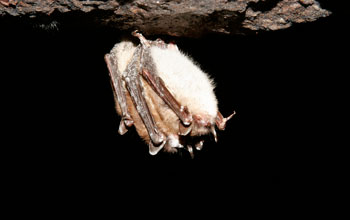 Hibernating little brown bats with white-nose syndrome, here in a N.Y. state mine.

View an infrared thermal imaging system video of bats emerging from a cave.

The effect on bat populations of a deadly fungal disease known as white-nose syndrome may depend on how gregarious the bats are during hibernation, scientists have discovered.

Species that hibernate in dense clusters even as their populations get smaller will continue to transmit the disease at a high rate, dooming them to continued decline, according to results of a new study led by biologists at the University of California, Santa Cruz (UCSC).

One gregarious species has surprised biologists, however, by changing its social behavior.

The joint National Science Foundation (NSF) and National Institutes of Health (NIH) Ecology and Evolution of Infectious Diseases (EEID) Program funded the study. The Directorates for Biological Sciences and Geosciences at NSF supports the EEID Program.

"Managing disease outbreaks appears to be a daunting task, given the complexity of most ecosystems," said Sam Scheiner, EEID program director at NSF. "This study, however, shows that in fact we can identify the key factors needed for adequate management."

White-nose syndrome has decimated bat colonies throughout the northeast since it first appeared in New York in 2006. It continues to spread in the United States and Canada.

In the study, researchers analyzed population trends in six bat species in the northeast.

They found that some bat populations are stabilizing at lower abundances, while others appear to be headed for extinction.

The results, published in the current issue of the journal Ecology Letters, centered around data from bat surveys between 1979 and 2010, covering a long period of population growth followed by dramatic declines caused by white-nose syndrome.

"All six species were affected by white-nose syndrome, but we have evidence that populations of some species are beginning to stabilize," said Kate Langwig of UCSC, first author of the paper.

"This study gives us an indication of which species face the highest likelihood of extinction, so we can focus management efforts and resources on protecting those species."

The bats hibernate during the winter in caves and abandoned mines; the number of bats can vary tremendously from one site to another.

The fungus that causes white-nose syndrome grows on the exposed skin of hibernating bats, disrupting their hibernation and causing unusual behavior, loss of fat reserves and death.

Langwig and co-authors looked at how steeply the bat populations at each site declined after they were hit by white-nose syndrome, and whether the severity of the decline was the same in large and small populations.

They found that for species that hibernate alone, the declines were less severe in smaller colonies. For gregarious species, however, even small colonies declined steeply.

"We found that in the highly social species that prefer to hibernate in large, tightly packed groups, the declines were equally severe in colonies that varied from 50 bats to 200,000 bats," said co-author Marm Kilpatrick of UCSC. "That suggests that colonies of those species will continue to decline even when they reach small population sizes."

Trends in the declines of different bat species since the emergence of white-nose syndrome support these predictions.

As populations get smaller, the declines tend to level off for species that roost singly, but not for socially gregarious species.

Surprisingly, however, one highly social species is bucking the trend.

The little brown bat, one of the most common bat species in the northeast, appears to be changing its social behavior, going from a species that preferred to roost in dense clusters to one in which most bats now roost apart from other bats.

"Our analysis suggests that the little brown bats are probably not going to go extinct because they are changing their social behavior in a way that will result in their persisting at smaller populations," Kilpatrick said.

Another gregarious species, the Indiana bat, continues to hibernate mostly in dense clusters and will probably continue to decline toward extinction.

"Since the appearance of white-nose syndrome, both species have become more solitary, but the change is much more dramatic in the little brown bats," Langwig said.

"We now see up to 75 percent of them roosting singly. For Indiana bats, only 8 to 9 percent are roosting alone, which does not appear to be enough to reduce transmission rates."

Even solitary roosting habits may not be enough to save some species, such as the northern long-eared bat.

Although it declined less rapidly as its colonies got smaller, 14 populations of northern long-eared bats became locally extinct within two years after the detection of white-nose syndrome. No populations remained in the study area after five years.

In contrast, populations of tri-colored bats, another solitary species, stabilized at low levels three to four years after disease detection.

"Northern long-eared bats may be particularly susceptible to the disease, so they continue to get hit pretty hard even after transmission rates are reduced," Langwig said.

It's not clear why they have been less affected by the disease than other species, Langwig said.

According to Kilpatrick, one possibility is that these species roost in sites where conditions are less conducive to the disease.

The study examined the influence of different microclimates within hibernation sites, and found that declines were less severe in drier and cooler sites.

"It appears that the driest and coolest caves may serve as partial refuges from the disease," Kilpatrick said.

In addition to Langwig and Kilpatrick, co-authors of the paper include Winifred Frick of UCSC; Jason Bried of Oklahoma State University; Alan Hicks of the New York State Department of Environmental Conservation; and Thomas Kunz of Boston University.

Much of the bat population data used in the study was collected in surveys conducted by state agencies during the past 40 years.

This research was also funded by Bat Conservation International and the U.S. Fish and Wildlife Service.