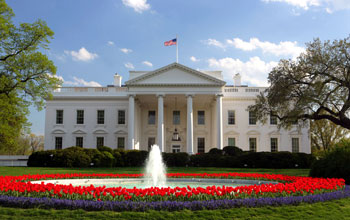 Of the teachers honored from across the country, 51 are science teachers and 46 are math teachers.

Recipients of the Presidential Awards for Excellence in Mathematics and Science Teaching (PAEMST) came to Washington, D.C., on June 25 for a week of recognition activities and professional development. Highlighting their trip was a visit to the White House, where they met with Vice President Joe Biden and his wife, Jill Biden, a longtime educator. The week's activities also included meetings with Secretary of Education Arne Duncan and National Science Foundation (NSF) Deputy Director Cora B. Marrett. (See the White House blog for additional details and photos.)

On June 28th, the awardees received certificates signed by President Obama at a ceremony at the Ronald Reagan Building and International Trade Center in Washington, D.C.

"America's success in the 21st century depends on our ability to educate our children, give our workers the skills they need and embrace technological change," the President said when announcing the awards last month.

"That starts with the men and women in front of our classrooms. These teachers are the best of the best, and they stand as excellent examples of the kind of leadership we need in order to train the next generation of innovators and help this country get ahead."

PAEMST represents the highest honors bestowed by the U.S. government specifically for K-12 mathematics and science teaching. Awardees serve as models for their colleagues, inspiration to their communities, and leaders in the improvement of mathematics and science education. In addition to the presidential certificate, awardees received a trip for two to Washington, D.C., and a $10,000 award from NSF.

Of the 97 teachers selected for this year's awards (see list below), there are 51 science teachers and 46 mathematics teachers from across the country, including the four U.S. jurisdictions of Washington, D.C., Puerto Rico, Department of Defense Education Activity schools and the U.S. territories as a group. U.S. territories include: American Samoa, Guam, the Commonwealth of the Northern Mariana Islands and the U.S. Virgin Islands.

PAEMST applications are reviewed at the state and national levels by selection committees of outstanding scientists, mathematicians, and educators.  Nominees are then sent to the White House Office of Science and Technology Policy (OSTP) and to the President for final selection. Each year the awards alternate between elementary (kindergarten through sixth grade) and secondary (seventh through 12th grade) teachers.

Since the program's inception in 1983, more than 4,200 teachers have received this honor. NSF administers PAEMST on behalf of OSTP. The 2011 Presidential awardees are listed below. For more information, including awardee photos, bios, and quotes, visit the PAEMST website.