Why We Need Insects--Even "Pesky" Ones

Hard evidence of evolution: a five-year study shows that plants may quickly lose important traits through evolution soon after insects are removed from the environment 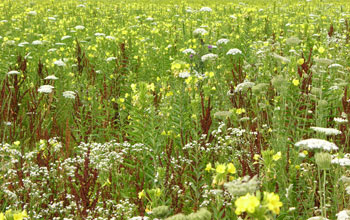 View a video interview with Anurag Agrawal of Cornell University.

At first blush, many people would probably love to get rid of insects, such as pesky mosquitoes, ants and roaches. But a new study indicates that getting rid of insects could trigger some unwelcome ecological consequences, such as the rapid loss of desired traits in plants, including their good taste and high yields.

Specifically, the study--described in the Oct. 5, 2012 issue of Science and funded by the National Science Foundation showed that evening primroses grown in insecticide-treated plots quickly lost, through evolution, defensive traits that helped protect them from plant-eating moths. The protective traits lost included the production of insect-deterring chemicals and later blooms that gave evening primroses temporal distance from plant-eating larvae that peak early in the growing season.

These results indicate that once the plants no longer needed their anti-insect defenses, they lost those defenses. What's more, they did so quickly--in only three or four generations.

Anurag Agrawal, the leader of the study and a professor of ecology and evolutionary biology at Cornell University, explains, "We demonstrated that when you take moths out of the environment, certain varieties of evening primrose were particularly successful. These successful varieties have genes that produce less defenses against moths."

In the absence of insects, the evening primroses apparently stopped investing energy in their anti-insect defenses, and so these defenses disappeared through natural selection. Agrawal says that he was "very surprised" by how quickly this process occurred, and that such surprises, "tell us something about the potential speed and complexities of evolution. In addition, experiments like ours that follow evolutionary change in real-time provide definitive evidence of evolution."

Agrawal believes that his team's study results are applicable to many other insect-plant interactions beyond evening primroses and moths.  Here's why: The ubiquitous consumption of plants by insects represents one of the dominant species interactions on Earth. With insect-plant relationships so important, it is widely believed that many plant traits originally evolved solely as defenses against insects. Some of these anti-insect plant defenses, such as the bitter taste of some fruits, are desirable.

"This experimental demonstration of how rapid evolution can shape ecological interactions supports the idea that we need to understand feedbacks between evolutionary and ecological processes in order to be able to predict how communities and ecosystems will respond to change," said Alan Tessier, a program director in NSF's Directorate for Biological Sciences.

"One of the things farmers are trying to do is breed agricultural crops to be more resistant to pests," said Agrawal. "Our study indicates that various genetic tradeoffs may make it difficult or impossible to maintain certain desired traits in plants that are bred for pest resistance."

In addition, oils produced by evening primroses have been used medicinally for hundreds of years and are beginning to be used as herbal remedies. Agrawal's insights about pests that attack these plants and about chemical compounds produced by these plants may ultimately be useful to the herbal and pharmaceutical industries.

Agrawal says that most previous real-time experiments on evolution have been conducted with bacteria in test tubes in laboratories. "One of things we were excited about is that we were able to repeat that kind of experiment in nature. You can expect to see a lot more of this kind of thing in future. We will keep our experiment running as a long-term living laboratory. "

More information about this study is available from a Cornell University press release.