Looking for a 'Smoking Gun' in Dinosaur Die-off 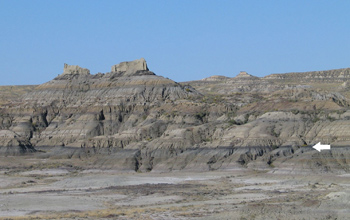 Rock strata in northeastern Montana; they span the time of the dinosaur extinction.

The demise of the dinosaurs has been called the world's ultimate whodunit.

Was the cause a comet or an asteroid impact? Volcanic eruptions? Climate change?

In an attempt to resolve the issue, scientists at the Berkeley Geochronology Center (BGC) at the University of California, Berkeley, and at universities in the Netherlands and the United Kingdom, have determined that an impact event occurred at about the same time as the mass extinction of the dinosaurs.

Using a recalibrated technique for dating Earth minerals, the researchers hypothesize that impact happened 66,038,000 years ago, and that it produced the final atmospheric conditions needed to wipe out the dinosaurs.

The newly determined date of the impact is the same, within error limits, as the date for the mass extinction event, which also occurred about 66 million years ago, according to Paul Renne, BGC director.

He and colleagues report their findings in this week's issue of the journal Science.

The dates are so close, the researchers say, that it was likely that a comet or asteroid that, if not wholly responsible for the global extinction, at least dealt the death blow.

"An impact was clearly the final straw, the tipping point," said Renne. "We've shown that [the impact and extinction] are synchronous to within a gnat's eyebrow, and therefore an impact clearly played a major role in the extinction. But it probably wasn't just the impact."

The revised date clears up lingering confusion over whether the impact actually occurred before or after the extinction, which was characterized by the almost overnight disappearance from the fossil record of land-based dinosaurs and many ocean creatures, Renne said.

"Accurately dating this major extinction, including that of the dinosaurs, has long been controversial," said H. Richard Lane, program director in the National Science Foundation's (NSF) Division of Earth Sciences, which funded the research. "These new results give us a sharper view of what happened in Earth's distant past."

Renne decided to recalculate the date of the boundary between the Cretaceous and Tertiary periods--the KT boundary--after recalibrating the argon-argon method used to date rocks, which relies on the decay rate of a radioactive isotope of potassium.

The impact in question left a 110-mile-wide crater in the Caribbean off the Yucatan coast of Mexico.

Called Chicxulub (cheek'-she-loob), the crater was excavated by an object some six miles across. It threw debris into the atmosphere that can be found around the globe in the form of glassy spheres or tektites, shocked quartz and a layer of iridium-enriched dust.

"Everybody had always looked at the age for the KT boundary and compared it with the ages that we had gotten for the tektites and the melt rock from the Chicxulub crater and said, 'oh yeah, this is pretty much the same age,'" Renne said.

"But they're not. They differ by 180,000 years. From this calibration issue, I started to realize, ‘Wow, there is a real problem here.'"

Renne and colleagues dated tektites from Haiti, analyzing them using the recalibrated argon-argon technique to determine how long ago the impact occurred.

The tektite results agreed with previously recalibrated data but were more precise.

The geologists then did the same for altered volcanic ash collected from the Hell Creek Formation in Montana, the source of many dinosaur fossils--and one of the best sites to study the change in fossils from before and after the extinction.

The new extinction date is precise to within 11,000 years, and is 200,000 years earlier than the recalibrated date determined in 1993.

Despite the synchronous impact and extinction, Renne cautions that this doesn't mean that the impact was the sole cause.

Dramatic climate variation over the previous million years, including long cold snaps amid a general Cretaceous hothouse environment, probably brought many creatures to the brink of extinction.

"The impact was the coup de grace," said Renne.

"These precursory phenomena made the global ecosystem much more sensitive to even relatively small triggers, so that what otherwise might have been a fairly minor effect shifted the ecosystem into a new state."

One cause of the climate variability could have been a sustained series of volcanic eruptions in India that produced the extensive Deccan Traps, ancient rock formations that represent one of the largest volcanic features on Earth. The Deccan Traps are believed to have formed between 60 and 68 million years ago.

He and colleagues also dated rocks above the KT boundary. They concluded that Earth's atmospheric carbon cycle returned to normal within about 5,000 years of the impact.

This is in stark contrast to the world's oceans, which studies show took between one and two million years to return to normal.

Renne attributes this to a sluggish recovery of pre-impact ocean circulation patterns.

The study's results also clarify some inconsistencies between different estimates for the age of the KT boundary based on Earth's orbital rhythms recorded in sedimentary rocks.

Dutch colleagues Frederik Hilgen of Utrecht University and Klaudia Kuiper of Vrije University had previously determined an age of 65,957,000 years for the boundary using this approach, which agrees with the new independent results within the margins of error.

"Many people think precision is just about adding another decimal place to a number. But it's far more exciting than that," he said.

"It's more like putting a sharper lens on a camera. It allows us to dissect the geological record at greater resolution and piece together the sequence of Earth history."

The paper's co-authors, in addition to Mark, Hilgen and Kuipler, are William Mitchell III at UC Berkeley, Alan Deino and Roland Mundil at BGC, Leah Morgan of the Scottish Universities Environmental Research Center and Jan Smit of Vrije University in Amsterdam.

In addition to funding from NSF, the work was also supported by the Ann and Gordon Getty Foundation and UC Berkeley's Esper S. Larsen Jr. Fund.