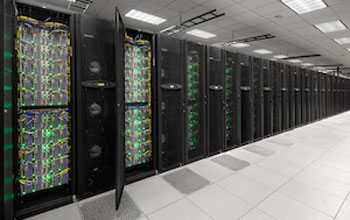 A National Science Foundation-supported, world-class supercomputer called Stampede--which has already enabled research teams to predict where and when earthquakes may strike, how much sea levels could rise and how fast brain tumors grow--was officially dedicated today.

The ceremony, held at the University of Texas at Austin's Texas Advanced Computing Center (TACC) and attended by corporate, government, and university leaders, formally introduced Stampede to the open science community.

Stampede is a cornerstone of NSF's investment in an integrated advanced cyberinfrastructure, which empowers America's scientists and engineers to interactively share advanced computational resources, data and expertise in order to further research across scientific disciplines. Stampede is now the most powerful and capable of the 16 high-performance computing, visualization and data analysis resources within the NSF Extreme Digital (XD) environment.

"Cyberinfrastructure has increasingly become a critical component of the science and engineering enterprise and is essential to accelerating the pace of discovery and innovation in all fields of inquiry," said Farnam Jahanian, head of NSF's Directorate for Computer and Information Science and Engineering.

Stampede expands the variety of data-intensive, computationally-challenging science and engineering applications that can be used with current national resources. It accommodates large-scale simulations that produce more accurate results.

Stampede's performance derives from two complementary processor technologies: First, a massive Dell cluster with Intel Xeon E5 processors provides a peak of 2.2 petaflops of computing power (this system has already been deployed and is fully subscribed for the next three months).

Second, Stampede adds new, innovative technologies: highly parallel Intel Xeon Phi coprocessors are currently being evaluated and are expected to contribute to a combined peak performance of 10 petaflops for the integrated system. Stampede is the largest installation of Intel's new Xeon Phi coprocessors.

"We at NSF are gratified to fund such a powerful combination of systems and services. The technological capacity is important; but even more important is that the scientific community--those on the frontlines of cutting edge, multidisciplinary research to address society's greatest challenges-have the resources necessary to push the frontiers of science and engineering," said NSF Program Director Irene Qualters.

Researchers from any U.S. open science institution can apply to use Stampede. The system annually will support more than a thousand projects in computational and data-driven science and engineering from across the United States. Its design efficiently supports a large, diverse workload accommodating the needs of large- and small-scale simulations, visualizations and new forms of data-intensive science.

"Stampede has been designed to support a large, diverse research community. We are as excited about Stampede's comprehensive capabilities and its high usability as we are of its tremendous performance," said TACC Director Jay Boisseau. "Stampede will lead the way to major advances in all fields of science and engineering. It's an honor to be at this intersection of advanced computing technologies and world-class science, and we thank NSF, Dell, and Intel for their roles in helping TACC design, deploy, and operate Stampede."

Stampede is one of two NSF-supported, supercomputing systems formally declared available for use this week. The other, Blue Waters, will be dedicated tomorrow at the National Center for Supercomputing Applications at the University of Illinois at Urbana Champaign. These two significant projects, now entering full deployment, are part of NSF's comprehensive strategy for advanced computing infrastructure to facilitate transformative foundational research in computational and data-intensive science and engineering across all disciplines.

What follows are a few examples of the exciting and promising early research on Stampede:

Seismic Hazard Mapping--Researchers from the Southern California Earthquake Center (SCEC) are using Stampede to predict the frequency of damaging earthquakes in California for the latest Uniform California Earthquake Rupture Forecast (UCERT3). "We do a lot of HPC calculations, but it's rare that any of them have this level of potential impact," said SCEC's Thomas Jordan. UCERT3 forecasts the probability of all earthquakes throughout a region and over a specified time span for incorporation into the U.S. Geological Survey's National Seismic Hazard Maps, which are used to set building codes and insurance rates.

Ice Sheet Modeling to Study Climate Change--The melting of the ice sheets of Antarctica has the potential to raise sea levels significantly. In fact, if all of the Antarctic ice melted, sea levels around the world would rise about 61 meters (200 feet). Omar Ghattas and his team at the UT Austin are using Stampede to better understand and represent the flow of ice from Antarctica using numerical models.

Improving the Imaging Quality of Brain Tumors--Surgeons want to know how aggressive a tumor is, and the degree of tissue infiltration surrounding the tumor, to be able to plan for surgery, radiotherapy and other treatment options. George Biros at UT Austin is using Stampede to improve the quality of brain tumor imaging so surgeons can make better-informed decisions about treatment options.

Carbon Dioxide Capture and Conversion--The Massachusetts Institute of Technology's Alexie Kolpak is using Stampede to design a new class of nanomaterials and to observe how they perform in real world applications, including solving energy problems.