Where Does Charcoal, or Black Carbon, in Soils Go?

Scientists find surprising new answers in wetlands such as the Everglades 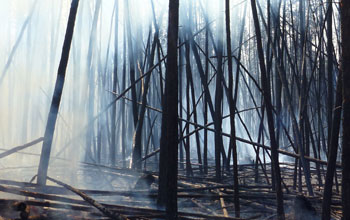 Charred boreal forest after a fire has raged: where does the "charcoal" go?

Scientists have uncovered one of nature's long-kept secrets--the true fate of charcoal in the world's soils.

The ability to determine the fate of charcoal is critical to knowledge of the global carbon budget, which in turn can help understand and mitigate climate change.

However, until now, researchers only had scientific guesses about what happens to charcoal once it's incorporated into soil. They believed it stayed there.

Surprisingly, most of these researchers were wrong.

The findings of a new study that examines the result of charcoal once it is deposited into the soil are outlined in a paper published this week in the journal Science.

The international team of researchers was led by scientists Rudolf Jaffe of Florida International University and Thorsten Dittmar of the German Max Planck Society.

"Most scientists thought charcoal was resistant," says Jaffe. "They believed that once it was incorporated into soils, it stayed there. But if that were the case, soils would be black."

Charcoal, or black carbon, is a residue generated by combustion including wildfires and the burning of fossil fuels.

When charcoal forms, it is usually deposited into the soil.

"From a chemical perspective, no one really thought it dissolved, but it does," Jaffe says.

"It doesn't accumulate for a long time. It's exported into wetlands and rivers, eventually making its way to the oceans."

It all started with a strange finding in the Everglades.

Dissolved organic carbon is known to be abundant in wetlands such as the Everglades and plays a critical role in the ecology of these systems.

Jaffe wanted to learn more about what comprised the organic carbon in the Everglades.

He and colleagues discovered that as much as 20 percent of the total dissolved organic carbon in the Everglades is charcoal.

Surprised by the finding, the researchers shifted their focus to the origin of the dissolved charcoal.

In an almost serendipitous scientific journey, Dittmar, head of the Max Planck Research Group for Marine Geochemistry at the University Oldenburg in Germany, was also tracing the paths of charcoal, but from an oceanographic perspective.

To map out a more comprehensive picture, the researchers joined forces. Their conclusion is that charcoal in soils is making its way into the world's waters.

"This study affirms the power of large-scale analyses made possible through international collaborations," says Saran Twombly, program director in NSF's Division of Environmental Biology, which funded the research along with NSF's Directorate for Geosciences.

"What started out as a puzzling result from the Florida Everglades engaged scientists at other LTER sites in the U.S., and eventually expanded worldwide," says Twombly. "The result is a major contribution to our understanding of the carbon cycle."

Fire is probably an integral part of the global carbon cycle, says Dittmar, its effects seen from land to sea.

The discovery carries significant implications for bioengineering, the scientists believe.

The new findings show that the amount of dissolved charcoal transported to the oceans is keeping pace with the total charcoal generated by fires annually on a global scale.

While the environmental consequences of the accumulation of black carbon in surface and ocean waters are currently unknown, Jaffe said the findings mean that greater consideration should be given to carbon sequestration techniques.

Biochar addition to soils is one such technique.

Biochar technology is based on vegetation-derived charcoal that is added to agricultural soils as a means of sequestering carbon.

As more people implement biochar technology, says Jaffe, they should take into consideration the potential dissolution of the charcoal to ensure that these techniques are environmentally friendly.

Jaffe and Dittmar agree that there are still many unknowns when it comes to the environmental fate of charcoal, and both plan to move on to the next phase of the research.

Now they'd like to answer how that happens, and what the environmental consequences are.

The more scientists can understand the process and the environmental factors controlling it, says Jaffe, the better the chances of developing strategies for carbon sequestration and mitigating climate change.

The research was also conducted at NSF's Bonanza Creek; Konza Prairie; Hubbard Brook; Coweeta; and Georgia Coastal Ecosystems LTER sites, and at other locations around the world.

Other authors of the paper are: Yan Ding of Florida International University; Jutta Niggemann of the Max Planck Research Group for Marine Geochemistry; Anssi Vahatalo of the University of Helsinki; Aron Stubbins of the Skidaway Institute of Oceanography in Savannah, Georgia; Robert Spencer of the Woods Hole Research Center in Massachusetts; and John Campbell of the USDA Forest Service.