Changes in Earth's orbit appear to be key to Antarctic warming 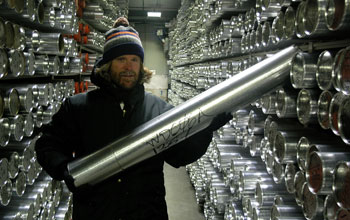 Brian Bencivengo, of the National Ice Core Laboratory, holds a segment of the WAIS ice core.

This timing shows that West Antarctica did not "wait for a cue" from the Northern Hemisphere to start warming, as scientists had previously supposed.

For more than a century scientists have known that Earth's ice ages are caused by the wobbling of the planet's orbit, which changes its orientation to the sun and affects the amount of sunlight reaching higher latitudes.

Most previous evidence for Antarctic climate change had come from ice cores drilled in East Antarctica, the highest and coldest part of the continent. However, a U.S.-led research team studying the West Antarctic core found that warming there was well underway 20,000 years ago.

WAIS Divide is a large-scale and multi-year glaciology project supported by the U.S. Antarctic Program (USAP), which NSF manages. Through USAP, NSF coordinates all U.S. science on the southernmost continent and aboard vessels in the Southern Ocean and provides the necessary logistics to make the science possible.

The WAIS Divide site is in an area where there is little horizontal flow of the ice, so the data are known to be from a location that remained consistent over long periods.

The WAIS Divide ice core is more than two miles deep and covers a period stretching back 68,000 years, though so far data have been analyzed only from layers going back 30,000 years. Near the surface, one meter of snow is equal to a year of accumulation, but at greater depths the annual layers are compressed to centimeters of ice.

"Sometimes we think of Antarctica as this passive continent waiting for other things to act on it. But here it is showing changes before it 'knows' what the North is doing," said T.J. Fudge, a University of Washington doctoral student in Earth and Space Sciences and lead corresponding author of the Nature paper. Fudge's 41 co-authors are other members of the WAIS project.

Fudge identified the annual layers by running two electrodes along the ice core to measure higher electrical conductivity associated with each summer season. Evidence of greater warming turned up in layers associated with 18,000 to 22,000 years ago, the beginning of the last deglaciation.

"This deglaciation is the last big climate change that we're able to go back and investigate," he said. "It teaches us about how our climate system works."

Rapid warming in West Antarctica in recent decades has been documented in previous research by Eric Steig, a professor of Earth and Space Sciences at the University of Washington who serves on Fudge's doctoral committee and whose laboratory produced the oxygen isotope data used in the Nature paper. The new data confirm that West Antarctica's climate is more strongly influenced by regional conditions in the Southern Ocean than East Antarctica is.

"It's not surprising that West Antarctica is showing something different from East Antarctica on long time scales, but we didn't have direct evidence for that before," Fudge said.

He noted that the warming in West Antarctica 20,000 years ago is not explained by a change in the sun's intensity. Instead, how the sun's energy was distributed over the region was a much bigger factor. It not only warmed the ice sheet but also warmed the Southern Ocean that surrounds Antarctica, particularly during summer months when more sea ice melting could take place.

Changes in Earth's orbit today are not an important factor in the rapid warming that has been observed recently, he added. "Earth's orbit changes on the scale of thousands of years, but carbon dioxide today is changing on the scale of decades so climate change is happening much faster today," Fudge said.

Julie Palais, the Antarctic Glaciology Program director in NSF's Division of Polar Programs, said new findings will help scientists to "better understand not only what happened at the end of the last ice age but it should also help inform our understanding of what might be happening as the climate warms and conditions begin to change in and around the Antarctic continent."

She added, "West Antarctica is currently experiencing some of the largest changes on the continent, such as the large calving events in the Amundsen Sea Embayment linked to warm ocean currents undercutting the outlet glaciers. The recent changes are consistent with the WAIS Divide results that show West Antarctica is sensitive to changes in ocean conditions in the past."