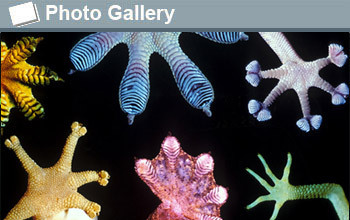 A slideshow on how biodiversity boosts the economy.

Every organism on Earth, from microbes to plants to large predators, has evolved unique survival mechanisms and distinct ecological roles. For decades, the National Science Foundation (NSF) has funded basic research on how these varied organisms, which make up the Earth's biodiversity, function.

For example, recent findings about how geckos climb up vertical walls and walk across ceilings led to the development of new adhesives and wall-climbing robots that may be used to, for example, produce new gravity-defying climbing boots and help collect space junk. (Learn more about gecko-inspired discoveries in the accompanying slide show.)

Kellar Autumn of Lewis & Clark College, who helped characterize the nanophysics of the gecko's Spider Man-like abilities, said, "Geckos, which evolved 160 million years ago are so novel that engineers would never have developed nano-adhesive structures without them. It took 15 years and lots of NSF support to understand the basic physical principles of gecko adhesion and then to apply them to make them work. This suggests that there is a library of biodiversity that can be mined for valuable uses if we have enough resources and enough time--in light of high extinction rates--to really understand them."

Learn more about the amazingly diverse ecological and economic benefits of biodiversity and its enduring mysteries from these accompanying resources:

Panelists in the Hangout were:

Related Websites
Following in the Footsteps of Nature (article about gecko-inspired innovations): http://www.nsf.gov/discoveries/disc_summ.jsp?cntn_id=116297