Whither the diversity of life on Earth? NSF, partners award $23 million for studies of planet's biodiversity 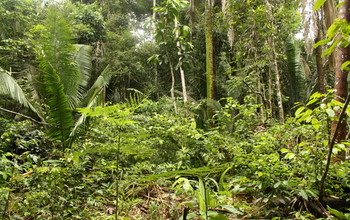 A view of tropical forest biodiversity 15 years after former pastures were abandoned.

Tropical deforestation has dramatic effects on biodiversity--and on the functioning of entire ecosystems.

Scientist Jorge Rodrigues of the University of California, Davis is investigating how microbial diversity in Amazon rainforests responds to changes in land use and how these changes affect the cycling of methane, a greenhouse gas.

Results from the study will help answer how biodiversity responds to and recovers from deforestation in Amazon forests. It will also help answer the extent to which microbes can regulate methane in these altered ecosystems.

Rodrigues' project is one of twelve funded this year by the National Science Foundation's (NSF) Dimensions of Biodiversity Program.

A total of $23 million dollars has been invested with contributions from NSF's Directorates for Biological Sciences and Geosciences, the São Paulo Research Foundation and the National Natural Science Foundation of China.

The program links functional, genetic and phylogenetic/taxonomic dimensions of biodiversity, offering opportunities to make rapid advances in understanding the generation, maintenance and loss of biodiversity.

"This year's portfolio of projects will accelerate our understanding of biodiversity across disciplines and across scales of time and space," says Penny Firth, director of NSF's Division of Environmental Biology. "Through this program, we're witnessing a transformation in our ability to bridge scientific approaches and perspectives."

The research will fill in gaps in biodiversity knowledge, Firth says. It also has the potential for significant impacts in the realms of agriculture, fuel, manufacturing and health.

For example, plant and animal extinctions are detrimental to human health, scientists have found. Species losses in ecosystems such as forests and fields result in increases in pathogens or disease-causing organisms. The species most likely to disappear as biodiversity declines are often those that buffer infectious disease transmission. Those that remain tend to be the ones that magnify diseases such as West Nile virus, Lyme disease and hantavirus.

Economic sustainability, researchers say, depends on the diversity of life on Earth. Many industrial materials, such as fiber and dye, come from biological sources. Biodiversity is also important to such resources as water and food.

Dimensions of Biodiversity scientists are working to stem the tide of species losses around the world.

The new Dimensions of Biodiversity projects focus on interactions between microbes and intertidal macroalgae and how their relationships change in response to natural and human-driven stresses; the role novel microbes play in fixing atmospheric nitrogen in Western pine trees; understanding the diversity and adaptive strategies of microorganisms in permafrost; investigating the genetic and ecological factors that foster diversification among yeast relatives; and the diversity of plant metabolism strategies in water-limited environments.

The Dimensions Program is also funding research to understand dormancy and its role in maintaining microbial biodiversity; relationships and interactions between ants and their gut microflora; mechanisms behind sensory adaptations in bats; parallel radiations of plants and microbes in United States' and Chinese forests and how historical constraints and local adaptations affect these interactions; the diversity of relationships among South American plants, caterpillars and parasites in food webs; and how the diversity of coral microbial communities explains the overall vulnerability of corals to stress and disease.

Dimensions of Biodiversity is part of NSF's Science, Engineering and Education for Sustainability (SEES) initiative.

Christopher Hittinger, University of Wisconsin, Madison: Dimensions: The Making of Biodiversity Across the Yeast Subphylum