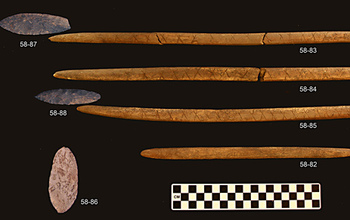 Artifacts from the burial site, include stone projectile points and antler foreshafts.

The bones and teeth of two--possibly related--Ice-Age infants, who were buried more than 11,000 years ago in central Alaska, constitute the youngest human remains ever found in the North American Arctic, according to a new paper published by National Science Foundation-funded researchers.

Ben A. Potter of the University of Alaska Fairbanks led the archaeological team that made the discovery in late 2013 at an excavation of the Upward Sun River site. The researchers worked closely with local and regional native tribal groups as they excavated the site.

He and his colleagues argue that direct evidence in the form of teeth, bones and artifacts associated with the burial, as well as inferences from the evidence as to what time of year the children died and were buried, could lead to new thinking about how early societies were structured, how they viewed death and the importance of rituals associated with death and what stresses they faced in trying to survive.

Potter said, "Taken collectively, these burials and cremation provide the first evidence for complex behaviors related to death among the early inhabitants of North America."

Potter is the lead author of a paper documenting the find that was published this week in the Proceedings of the National Academy of Sciences.

Potter made the new find on the site of a 2010 excavation, where the cremated remains of another young Ice-Age child were previously found. The remains of the two infants were found in a pit directly below a hearth where the 2010 remains were uncovered.

In the most recent paper, Potter and his colleagues describe unearthing the remains in the hearth of a residential structure about 40 centimeters (15 inches) below the level of the 2010 find. The radiocarbon dates of the newly discovered remains are identical to those of the previous find, suggesting a short period of time between the burial and cremation.

Also found among the burials were the shaped stone heads of what may be some of the oldest examples of "hafted bifaces," or projectile points, found in North America. Antler foreshafts, to which the points were likely affixed, were also found very close to the remains and form grave offerings deposited along with the two infants.

"The presence of hafted points," the paper notes, "may reflect the importance of hunting implements in the burial ceremony and with the population as whole."

In addition to radiocarbon dating, the researchers also have examined dental and skeletal remains to determine the probable age and sex of the infants at the time of the death.

While the results of DNA testing of the remains--which will confirm additional details of the find--are not yet available, Potter said that, based on the initial detailed examination, it is possible that the children were twins, one of whom died shortly, possibly within weeks, after being born, while the other was a late-term fetus. If the infants were not twins, then their concurrent deaths may indicate resource stresses, such as food shortages, among these early Americans.

The artifacts--including the projectile points and plant and animal remains--may also help to build a more complete picture of early human societies and how they were structured and survived at the end of the last great Ice Age. The presence of two burial events--the buried infants and cremated child--within the same feature could indicate relatively longer-term residential occupation of the site than previously expected.

The remains of salmon-like fish and ground squirrels in the burial pit, meanwhile, indicate that the site where the burial took place was likely occupied by hunter-gatherers between June and August.

"The deaths occurred during the summer, a time period when regional resource abundance and diversity was high and nutritional stress should be low, suggesting higher levels of mortality than may be expected given our current understanding" of survival strategies of the period, the authors write.

Such finds are valuable to science because except in special circumstances--such as the preservation of remains like those described in the paper--there is little direct evidence about social organization and burial practices of early human cultures, none of which had written languages.