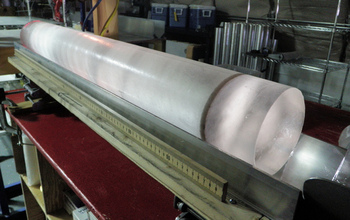 A new, highly detailed ice core retrieved by researchers with the National Science Foundation (NSF)-funded West Antarctic Ice Sheet (WAIS) Divide project reveals a consistent pattern of climate changes that started in the Arctic and spread across the globe to the Antarctic during planet Earth's last glacial period, tens of thousands of years ago.

Representing more than 68,000 years of climate history, data extracted from the core--a cylinder of ice that represents a cross-section of the ice sheet--is helping scientists understand past, rapid climate fluctuations between warm and cool periods that are known as Dansgaard-Oeschger events.

Published today in the journal Nature, the new research illustrates how sudden climate changes that began in the North Atlantic around Greenland circulated southward, appearing in the Antarctic approximately 200 years later. Further, the new findings show how ocean currents were largely responsible for redistributing the heat between the Northern and Southern hemispheres in a process called the bipolar seesaw.

The ice containing the data is known as the WAIS Divide ice core. The cylinders that make up this core contain uniquely detailed information on past environmental conditions such as the atmospheric concentration of greenhouse gases, surface air temperature, wind patterns, and the average temperature of the ocean.

"Our findings show how ocean currents can transmit climate changes that start in the Arctic across the globe all the way to the Antarctic," said Kendrick Taylor of the Desert Research Institute (DRI) in Nevada and chief scientist for the WAIS Divide project, who in addition to leading the project spent five seasons in Antarctica collecting the core and helped determine the age of the ice.

"Knowing how ocean currents influenced past climates will help us predict how the current human-caused variations in climate could propagate across our planet," he added.

The WAIS Divide Project is a major ice-coring and climate investigation, encompassing numerous collaborative awards to investigators at many institutions nationwide, supported by the Division of Polar Programs in NSF's Geosciences Directorate. The Division manages the U.S. Antarctic Program, through which it coordinates all U.S. scientific research on the southernmost continent and in the surrounding oceans, and provides the logistical support that makes the research possible.

A team of researchers based at the DRI and led by Joe McConnell, used their unique ice-core analytical system to measure impurities associated with sea salts and desert dust in more than two kilometers (1.6 miles) of the WAIS Divide ice core in support of this research.

Many of the methane measurements used in this study were measured by Oregon State University researchers also working in DRI's ice-core laboratory in Reno. The past temperatures were determined by measuring the isotopes of the melted ice at the University of Washington.

The Dansgaard-Oeschger events reference the name given to warm periods in Greenland that lasted a few thousand years. The transition into and out of these warm periods occurred in less than 20 years, much faster than anything experienced in the last 10,000 years. Temperature changes in Antarctica followed an opposite pattern, with Antarctica cooling when Greenland was warm, and vice versa.

"These past climate changes are different from what is happening today," said the study's lead author Christo Buizert, a postdoctoral researcher at Oregon State University.

"The abrupt climate changes during the ice age were regional in scope and caused by large-scale changes in ocean circulation. The changes in temperature and precipitation that are occurring now are global and primarily caused by increasing levels of carbon dioxide in the Earth's atmosphere."

However, Buizert explained, these new observations can be used to test and improve the global climate models that are used to predict future warming.

The research team, consisting of 28 science and engineering groups from around the United States, considered sites all over Antarctica before selecting the WAIS Divide site with the best combination of thick ice--3,405 meters (11,200 feet), simple ice flow and the optimal amount of annual snowfall: roughly ~40 centimeters (1.5 feet).

Related Websites
This series of NSf-produced videos provides a look at the history of the West Antarctic Ice Sheet, the life a scientist leads while on the ice, and the results from the data obtained by scientists studying the WAIS Divide.: https://www.youtube.com/playlist?list=PL0ujJTaPsv3cYFqpPc-eF4NMwHIlZLs-1