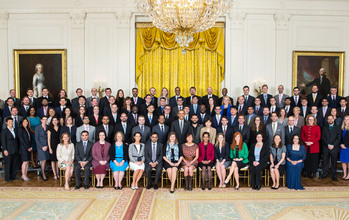 President Barack Obama today named 105* researchers as recipients of the Presidential Early Career Award for Scientists and Engineers (PECASE), granting them the U.S. government's highest award for scientists and engineers in the early stages of their independent research careers. The National Science Foundation (NSF) nominated 21 of the awardees.

"The awardees are outstanding scientists and engineers," said NSF Director France Córdova. "They are teacher-scholars who are developing new generations of outstanding scientists and engineers and ensuring this nation is a leading innovator. I applaud these recipients for their leadership, distinguished teaching and commitment to public outreach."

The NSF-nominated awardees come from universities around the country and excel in areas of science represented by NSF directorates: biology, computer and information science, education and human resources, engineering, geosciences, mathematics and physical sciences and social and behavioral sciences.

NSF vetted the research of its nominees through its rigorous peer review process. All of the NSF nominees have received five-year grants from the Faculty Early Career Development (CAREER) program. CAREER awardees have proven themselves exemplary in integrating research and education. Selection is highly competitive: in 2012, NSF funded fewer than 20 percent of the 2,612 CAREER award applicants.

The Office of Science and Technology Policy within the Executive Office of the President coordinated the PECASE awards, which were established by President Clinton in 1996. Awardees are selected on the basis of two criteria: pursuit of innovative research at the frontiers of science and technology and a commitment to community service as demonstrated through scientific leadership, public education or community outreach.

NSF Director France Córdova met with the 21 NSF-nominated awardees during a morning ceremony May 4. They joined other recipients later the same day for a ceremony hosted by the White House Office of Science and Technology Policy and met with President Barack Obama May 5.

For his development of microfluidic approaches for creating single-cell bioreactors that may be applied to massively parallel approaches in single-cell genomics and transcriptomics and that can be implemented across a variety of disciplines including evolutionary biology, immunology, and cancer biology and for his outreach to underrepresented groups and veterans.

For his groundbreaking research in stellar astrophysics, and for his restless desire to ensure that minority students in sciences become tomorrow's leaders.

For research aimed to fundamentally understand, model and control bacterial biofilm formation through imaginative computations and elegant experiments, and for demonstrated commitment to increase underrepresented minority participation in STEM-related research.

For research to create highly sensitive systems that probe microbial physiology and thereby illustrate the coupling of cell phenotypes with virulence, and to train a new generation of underreprented minority scientists who become faculty.

For discovery of chemistry underlying a new approach to treat antibiotic-resistant infections, for leadership in the chemistry and women-chemists communities, and for developing new hands-on laboratory activities to engage K-12 students in natural product chemistry.

For outstanding research on the stochastic behavior in engineered and physical systems; and for educational activities involving high school, undergraduate and graduate students.

For innovative research leading to exciting breakthroughs in understanding the drivers of plant evolutionary innovation, and particularly the evolution of plant form and photosynthesis systems, and for engaging public outreach on plant biology.

For her work on the invariants of 3-manifolds, running advanced workshops, training graduate and undergraduate students, contributions to increasing participation of women in mathematical sciences and introducing talented middle-school girls to research mathematics.

For his innovative work at the boundary of cognitive science, learning science and machine learning; for his work with museums to enhance the learning potential for children; and for creating an integrated, multidisciplinary curriculum for computational cognitive science for the workforce of the 21st century.

For her transdisciplinary research that places modern ocean acidification and ocean oxygenation into a long-term Earth-system context, and for training and outreach to K-12 teachers and students that offers them a better understanding of ocean science and climate change through inquiry-based learning.

For his work on local-to-global principles, organizing conferences and workshops, training graduate students and serving as a role model to underrepresented minorities in mathematics.

For research combining modeling, neurophysiology and systems biology/network science that will transform the field of social neuroscience by providing a comprehensive approach towards understanding the role of neuropetides in complex behavioral systems.

For inventing a new formal methodology to test and verify the correct operation of medical device software, saving lives and reducing care costs.

For his cutting-edge research in the emerging field of theoretical molecular nanophotonics, and for his comprehensive educational and outreach programs including an exemplary focus on enhancing the scientific communication abilities of young researchers.

For inventing low-cost, easy-to-deploy sensor systems that leverage existing infrastructures to enable users to track household energy consumption and make the buildings we live in more responsive to our needs.

For visionary research on protecting personal data via differential privacy, and outstanding outreach that fosters interaction between the many communities that study data privacy from theoretical computer science to economics.

For pioneering research on the foundations of nanostructures as new, low-power electronics with potential influence on energy efficient systems, and for impact on industry, education and mentoring future scientists.

For her research on how African-American middle-school girls develop computational algorithmic thinking within the context of designing games, a research project that explores the challenges African-American girls face and their self-perceptions as problem-solvers while at the same time educating them in mathematics, programming and reasoning.

For building research capacity in engineering education by defining quality in qualitative research methods and leading communities of practice in this research, germane to and commonly used in broadening participation efforts.

For her outstanding research work on how to integrate a community-based engineering design model into pre-service science elementary school teachers focused on crosscutting concepts, disciplinary core ideas and scientific and engineering practices.

For a comprehensive vision to advance Terahertz quantum-cascade lasers and devices for communications, sensing and imaging, and for leadership in enhancing undergraduate and graduate student learning experiences.