What lies beneath West Antarctica? 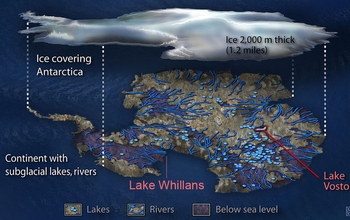 An artist's conception of the Antarctic subglacial environment.

Three recent publications by early career researchers at three different institutions across the country provide the first look into the biogeochemistry, geophysics and geology of subglacial Lake Whillans, which lies 800 meters (2,600 feet) beneath the West Antarctic Ice Sheet.

Collectively, the researchers describe a wetland-like area beneath the ice. Subglacial Lake Whillans is primarily fed by ice melt, but also contains small amounts of seawater from ancient marine sediments on the lake bed. The lake waters periodically drain through channels to the ocean, but with insufficient energy to carry much sediment.

The new insights will not only allow scientists to better understand the biogeochemistry and mechanics of the lake itself, but will also allow them to use that information to improve models of how Antarctic subglacial lake systems interact with the ice above and sediment below. These models will help assess the contribution that subglacial lakes may have to the flow of water from the continent to the ocean, and therefore to sea-level rise.

In recent decades, researchers, primarily using airborne radar and satellite laser observations, have discovered that a continental system of rivers and lakes -- some similar in size to North America's Great Lakes -- exists beneath the miles-thick Antarctic Ice Sheet. These findings represent some of the very first methodical descriptions of one of those lakes based on actual sampling of water and sediments.

In January 2013, the WISSARD project successfully drilled through the ice sheet to reach subglacial Lake Whillans, retrieving water and sediment samples from a body of water that had been isolated from direct contact with the atmosphere for many thousands of years. The team used a customized, clean hot-water drill to collect their samples without contaminating the pristine environment.

WISSARD was preceded by ongoing field research that began as early as 2007 to place this individual lake in context with the larger subglacial water system. Those investigations and the sampling of Subglacial Lake Whillans were funded, and the complex logistics provided by, the NSF-managed U.S. Antarctic Program.

Some of the initial analyses of the samples taken from the lake are highlighted in the recent papers, published in three different journals by three scientists whose graduate work was funded, at least in part, through the WISSARD project. They used an array of biogeochemical, geophysical and geological methods to provide unique insights into the dynamics of the subglacial system.

In a paper published in Geophysical Research Letters, lead author Matthew Siegfried of the Scripps Institution of Oceanography at the University of California, San Diego, and his colleagues report that global Positioning System (GPS) data gathered over a period of five years indicate that periodic drainage of the lake can increase velocity at the base of the ice sheet and speed up movement of the ice by as much as 4 percent in episodic bursts, each of which can last for several months.

The authors suggest that these short-term dynamics need to be better understood to help refine prediction of future, long-term ice sheet changes.

In a second paper, published in Geology, lead author Alexander Michaud of Montana State University (MSU), and his colleagues -- including two other MSU WISSARD-trained students, graduate student Trista Vick-Majors and undergraduate student Will van Gelder -- used data taken from a 38-centimeter-long (15-inch) core of lake sediment to characterize the water chemistry in the lake and its sediments.

Their findings indicate that lake water comes primarily from melting at the base of the ice sheet covering the lake, with a minor contribution from seawater, which was trapped in sediments beneath the ice sheet during the last interglacial period, when the Antarctic Ice Sheet had retreated. This ancient, isolated reservoir of ocean water continues to affect the biogeochemistry of this lake system. This new finding contrasts with previous studies from neighboring ice streams, where water extracted from subglacial sediments did not appear to have a discernable marine signature.

In the third paper, published in the journal Earth and Planetary Science Letters, lead author Timothy Hodson of Northern Illinois University and his colleagues examined another sediment core taken from the lake to discover more about the relationship between the ice sheet, subglacial hydrology and underlying sediments.

Their findings show that even though floods pass through the lake from time to time, the flow is not powerful enough to erode extensive drainage channels, like the rivers that drain much of the Earth's surface. Rather, the environment beneath this portion of the ice sheet is somewhat similar to a wetland within a coastal plain, where bodies of water tend to be broad and shallow and where water flows gradually.

Together, these new publications highlight an environment where geology, hydrology, biology and glaciology all interact to create a dynamic subglacial system, which can have global impacts.

Helen Amanda Fricker, a WISSARD principal investigator and a professor of geophysics at Scripps, who initially discovered subglacial Lake Whillans in 2007 from satellite data, said: "It is amazing to think that we did not know that this lake even existed until a decade ago. It is exciting to see such a rich dataset from the lake, and these new data are helping us understand how lakes function as part of the ice sheet system."

Understanding and quantifying this and similar systems, she added, requires training a new generation of scientists who can cross disciplinary boundaries, as exemplified by the WISSARD project.