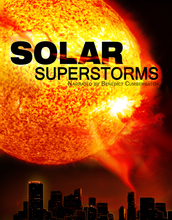 Solar Superstorms documentary looks into the sun's violent phenomena and their impacts on Earth.

The National Science Foundation (NSF), the supercomputer company Cray Inc., and Sens. Bill Nelson of Florida and Gary Peters of Michigan invite members of the media to attend a special screening of the documentary "Solar Superstorms" May 25 at the Russell Senate Office Building in Washington, D.C.

High-velocity jets, fiery tsunamis that reach up to 100,000 kilometers and rising loops of electrified gas -- NSF and Cray Inc. ask what's driving these strange phenomena that take place on the sun and how might they affect planet Earth?

Without question, these occurrences are beautiful, but every year, they cost the United States billions of dollars.

This groundbreaking scientific documentary features the most intensive computational models of the sun's inner workings ever made. Mathematical models, which helped produce incredible scientific visualizations, were computed on one of the most powerful computers in the world: the NSF-funded Blue Waters supercomputer at the National Center for Supercomputing Applications at the University of Illinois at Urbana-Champaign.

The screening features a full airing of the documentary, which is narrated by acclaimed British actor Benedict Cumberbatch ("Sherlock," "The Imitation Game," "War Horse"), followed by a panel discussion with scientific experts, who contributed to the documentary's production.

See the trailer of Solar Superstorms.

To speak with featured guests or speakers about their work, journalists should contact NSF's Bobbie Mixon to help arrange onsite interviews: bmixon@nsf.gov, (703) 292-8485.