Marking five years of the National Robotics Initiative in Washington, D.C. on June 9 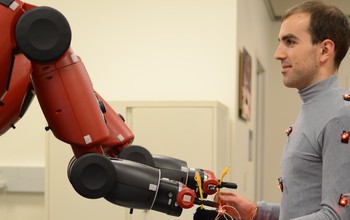 Expo will feature a panel discussion with roboticists and demonstrations of novel co-robot research.

To promote the progress and promise of collaborative robotics (co-robot) research, the Congressional Robotics Caucus will host an expo on Thursday, June 9, 2016, in Washington, D.C.

The event will mark the five-year anniversary of the National Robotics Initiative, a multi-agency effort among the National Science Foundation (NSF), NASA, the National Institutes for Health (NIH), the U.S. Department of Agriculture (USDA), the Department of Defense (DOD) and the Department of Energy (DOE) to accelerate the development and use of robots that work beside or cooperatively with people and solve problems in areas of national priority.

The event, hosted by Congressional Robotics Caucus Co-Chairs Congressman Rob Woodall and Congressman Mike Doyle, will feature the latest in robotic technologies, as well as a discussion among leading scientists, educators and thought-leaders, and will promote improved public understanding of development of co-robots in the modern world.

The panel will feature:

The exhibition will feature researchers leading NRI-funded projects and agencies, including:

About the National Robotics Initiative

The goal of the National Robotics Initiative is to accelerate development and use of robots in the United States that work beside or cooperatively with people. Innovative robotics research and applications emphasizing the realization of such co-robots working in symbiotic relationships with human partners is supported by multiple agencies of the federal government including NSF, NASA, NIH, USDA, DOE, and DOD.

About the Congressional Robotics Caucus

The Congressional Robotics Caucus was formed in 2007 to focus on key issues facing the nation's robotics industry and related emerging technology. Members of Congress will learn firsthand about the use of robotics in agriculture, mining, logistics, defense, education, manufacturing and healthcare.

For more information about the event, please visit: http://1.usa.gov/25BFgj4.