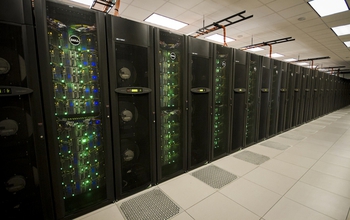 Today, the National Science Foundation (NSF) announced a $30 million award to the Texas Advanced Computing Center (TACC) at The University of Texas at Austin (UT Austin) to acquire and deploy a new large-scale supercomputing system, Stampede 2, as a strategic national resource to provide high-performance computing (HPC) capabilities for thousands of researchers across the U.S.

This award builds on technology and expertise from the Stampede system first funded by NSF in 2011 and will deliver a peak performance of up to 18 Petaflops, over twice the overall system performance of the current Stampede system. Stampede 2 will be among the first systems to employ cutting-edge processor and memory technology to continue to bridge users to future cyberinfrastructure.

Stampede 2 will be deployed by TACC in conjunction with vendor partners Dell Inc., Intel Corporation, and Seagate Technology, and operated by a team of cyberinfrastructure experts at TACC, UT Austin, Clemson University, Cornell University, the University of Colorado at Boulder, Indiana University, and Ohio State University.

"NSF is proud to join with the University of Texas at Austin in supporting the nation's academic researchers in science and engineering with the latest in advanced computing technology and expertise," said Irene Qualters, NSF Division Director for Advanced Cyberinfrastructure. "Stampede 2's capabilities will complement and significantly expand the diverse portfolio of computing resources increasingly essential to exploration at the frontiers of science and engineering."

The announcement of Stampede 2 comes at a time when the use of NSF-supported research cyberinfrastructure resources is at an all-time high and continuing to increase across all science and engineering disciplines. Since 2005, the number of active institutions using this research cyberinfrastructure has doubled, the number of principal investigators has tripled, and the number of active users has quintupled. Furthering the Stampede system will help enable a growing number of scientists to have access to computation at-scale.

"The original Stampede system has run more than 7 million simulation and data analysis jobs for tens of thousands of users around the country and around the world," noted Dan Stanzione, executive director of TACC and principal investigator of the Stampede and Stampede 2 projects. "The kind of large-scale computing and data capabilities systems like Stampede and Stampede 2 provide are crucial for innovation in almost every area of research and development, from providing insights to fundamental theory to applied work that has real near-term impacts on society. Stampede has been used for everything from determining earthquake risks to help set building codes for homes and commercial buildings, to computing the largest mathematical proof ever constructed. We thank the NSF for trusting us again with the tremendous responsibility of supporting our nation's researchers as they push the boundaries of discovery."

Researchers across the nation can gain access to Stampede and other advanced computing resources, including other HPC machines, high throughput computing machines, visualizations, data storage, testbeds, and services through the NSF-funded Extreme Science and Engineering Discovery Environment (XSEDE).

The award for Stampede 2 will deploy a new system that will surpass performance of the current Stampede system, doubling peak performance, memory, storage capacity and bandwidth. The new system will be deployed in phases, using a variety of new and upcoming technologies. The processors in the system will include a mix of upcoming Intel® Xeon Phi™ Processors, codenamed "Knights Landing," and future-generation Intel® Xeon® processors, connected by Intel® Omni-Path Architecture. The last phase of the system will include integration of the upcoming 3D XPoint non-volatile memory technology.

"The first Stampede system has been the workhorse of XSEDE, supporting the advanced modeling, simulation, and analysis needs of many thousands of researchers across the country," said Omar Ghattas, a computational geoscientist/engineer at UT Austin and recent winner of the Gordon Bell prize for the most outstanding achievement in high-performance computing.

"Stampede has also given us a window into a future in which simulation is but an inner iteration of a 'what-if?' outer loop. Stampede 2's massive performance increase will make routine the principled exploration of parameter space entailed in this outer loop. This will usher in a new era of HPC-based inference, data assimilation, design, control, uncertainty quantification, and decision-making for large-scale complex models in the natural and social sciences, engineering, technology, medicine, and beyond.”

"We are both excited for and proud to power TACC's multiple Stampede Systems. TACC has been a great Dell customer and partner over the years, helping us to evolve our own portfolio as we continue to push the HPC industry forward," said Ganthier. "Our Dell technologies at the core of the Stampede 2 supercomputing cluster will continue powering leading-edge research to both enable and advance science and society."

"The NSF and TACC continue to recognize the need for advanced HPC solutions as a fundamental tool to accelerate academic and scientific discovery," Wuischpard said. "Stampede 2 will be a leadership-class system based on the Intel® Scalable System Framework, delivering a common platform for modeling, simulation, and data-driven science, and fueling scientific research and discovery for the next generation of researchers."

The event also included a symposium on advanced computing featuring users of the system: Ghattas; Ellen Rathje, of UT Austin, who leads the NSF-funded DesignSafe infrastructure; Peter Couvares of Syracuse University from the Advanced LIGO project, which recently confirmed the first observation of gravitational waves; and Nirav Merchant from the University of Arizona, who is co-principal investigator of the NSF-funded CyVerse life sciences cyberinfrastructure.

Intel, Xeon and Xeon Phi are trademarks or registered trademarks of Intel Corporation in the United States and other countries.