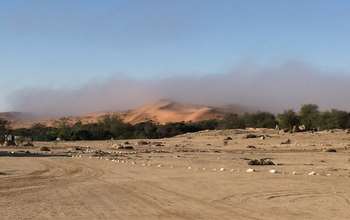 Fog, seen here receding in the morning, comes and goes quietly in the Namib Desert.

The ocean is not the sole source of the fog that sustains life for numerous plants and animals living in Africa's coastal Namib Desert. The fog also comes from groundwater and other sources, report ecohydrologists supported by the National Science Foundation (NSF) and affiliated with Indiana University-Purdue University Indianapolis (IUPUI).

The scientists conducted the research in one of the world's oldest and most biologically diverse deserts. Their results are published today in the journal Science Advances.

Today on World Water Day -- and in fact every day -- water sources are an important consideration for society. To develop ecological models of arid environments, scientists say they must deepen their understanding of water sources. That knowledge can help them assess how plants and animals function in current and possible future climates.

Fog and, to a lesser degree, dew are crucial sources of moisture in the Namib Desert. Fog consists of tiny droplets of water suspended in air; dew is water that forms on the surfaces of plants, soil and other objects on the ground.

"Knowing exactly where fog and dew come from will help us predict the availability of non-rainfall water in the future, both in the Namib and elsewhere," said Lixin Wang, an ecohydrologist at IUPUI who led the study. "With this knowledge, we may be able to determine ways to harvest novel water sources for potential use in water scarcity situations."

Surprisingly, non-ocean-derived fog accounted for more than half the total fog in the Namib over the period of the study.

Groundwater was the most significant generator of non-ocean fog, serving as a source of more than a quarter of the fog in the desert. Soil water, which comes from rainfall and is located below the surface, but higher than groundwater, was also an unexpected source of moisture.

With environmental change, more areas in the U.S. and around the world are becoming drier and more desert-like. Drylands -- which include deserts and parched, non-desert areas such as parts of the Great Plains and southwestern U.S. -- cover approximately 40 percent of Earth's land surface and are home to an estimated 2.5 billion people, researchers have found.

"Dryland ecosystems have some of the lowest annual rainfall amounts on Earth," said Tom Torgersen, a hydrologist and program officer in NSF's Division of Earth Sciences. "To survive, these ecosystems recycle water in the form of fog and dew. In the driest places on the planet, even seemingly minor components of the water cycle, such as fog and dew, become major and are critical to keeping the environment alive and functioning."

Like other dryland ecosystems worldwide, the Namib's hydrologic cycle is likely to change in the coming decades. Given the importance of fog and dew in this desert, Wang said, the Namib serves as an ideal location to study non-rainfall water.

The Namib ranges in temperature from below 32 to 140 degrees Fahrenheit (zero to 60 degrees Celsius) and is almost completely devoid of surface water. Many parts of the desert receive virtually no rain. Some years are rainless; others may see only an inch or two of rain on average, although some spots may receive as much as four inches.

But the Namib supports a range of specially-adapted organisms, such as fog-harvesting beetles. To survive during rainless periods, most of the Namib's plants and animals likely obtain moisture from fog or dew, said Wang. His future research will focus on the mechanisms by which groundwater and soil water become fog and dew.

The long-term goal, he said, is to expand this ecohydrology research beyond the Namib to a global scale.

Kudzai Farai Kaseke of IUPUI and Mary Seely, a desert ecologist and the former director of the Gobabeb Research and Training Center in Namibia, co-authored the paper with Wang.