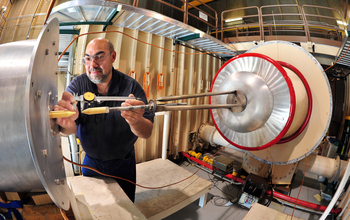 A researcher performs calibrations on the Sandia Lightning Simulator.

The FFRDCs are privately operated R&D organizations that are exclusively or substantially financed by the federal government. Federal agencies funded over 98 percent of R&D expenditures by FFRDCs in FY 2015, while other funding sources provided a very small share of the total.

Accounting for inflation, expenditures rose 3.1 percent from FY 2014 to FY 2015. The increase came after four straight years of constant dollar declines in expenditures and two years of flat or decreased expenditures in current dollars.

For more information, including detailed breakdowns of funding by source from FY 2010 to FY 2015, read the full report.