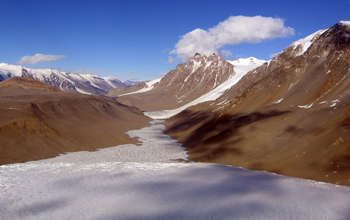 The McMurdo Dry Valleys with a view of Lake Hoare and the Canada Glacier.

Airborne soot produced by wildfires and fossil-fuel combustion and transported to the remote McMurdo Dry Valleys of Antarctica contains levels of black carbon too low to contribute significantly to the melting of local glaciers, according to a new study by researchers supported by the National Science Foundation (NSF).

Strong winds in the Dry Valleys, however, can temporarily cause large spikes in the amount of locally produced black carbon, which is distributed through the ecosystem, the researchers found.

They conclude that further study of local carbon production and transport would help to understand the limited effects of local black carbon production on the Dry Valleys ecosystem, compared to the effects of windblown sediments, commonly deposited in the ablation regions of the glaciers, that have been shown to influence melt.

Alia Khan from the the University of Colorado Boulder's Institute of Arctic and Alpine Research and the National Snow and Ice Data Center, along with her colleagues at the NSF-funded McMurdo Dry Valleys Long Term Ecological Research (LTER) project, published the paper in the Journal of Geophysical Research: Atmospheres.

The Dry Valleys are a unique ecosystem within the Antarctic continent. The continent as a whole is a landmass the size of the U.S. and Mexico combined, of which 98 percent is permanently covered with ice and snow. The Dry Valleys, by contrast, are ice-free, mountainous regions, interspersed with glaciers, where little snow accumulates because they are scoured by winds.

Samples taken from a snow pit in the accumulation region of the Commonwealth Glacier suggest the black carbon transported from beyond the continent is not sufficient to reduce the albedo -- the glacier's ability to reflect light -- to a degree that would increase melting. Researchers took the samples during the 2013-2014 Antarctic research season.

"The black carbon deposited from long-range atmospheric transport in the snow accumulation regions of the glaciers is present in very low concentrations in the snow, too low to reduce the surface albedo of the glaciers," Khan said.

The research showed that while concentrations of black carbon aerosols near the surface of the valley floor are low, locally produced black carbon may stay sequestered in the upper layers of soils near field camps until it is disturbed and distributed by high winds, including the so-called Foehn wind event, a warm southerly wind that occurred during the study period.

The results of the work indicate that the near-surface concentrations of black carbon in the air in the local area can increase by a factor of three during episodic wind storms.

"We were surprised by the sharp increase in concentrations at the field camp site during the strong winds, which suggests the locally produced black carbon particles, which are generally too large to travel very far, are re-suspended during these wind events," Khan said.