Neutrino observation points to one source of high-energy cosmic rays 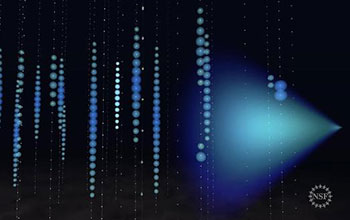 Observations made by researchers using a National Science Foundation (NSF) detector at the South Pole and verified by ground- and space-based telescopes have produced the first evidence of one source of high-energy cosmic neutrinos. These ghostly subatomic particles can travel unhindered for billions of light-years, journeying to Earth from some of the most extreme environments in the universe.

Data gathered by NSF's IceCube Neutrino Observatory at the foundation's Amundsen-Scott South Pole Station in Antarctica point to an answer to a more than century-old riddle about the origins of high-energy cosmic rays.

That the detection was confirmed by other instruments, including an orbiting telescope operated by NASA, is a demonstration of the value of the emerging field of "multi-messenger astronomy," which describes the ability to marshal instruments globally to make and verify discoveries by combining data from messenger signals that reveal information about the universe.

"The era of multi-messenger astrophysics is here," said NSF Director France Córdova. "Each messenger -- from electromagnetic radiation, gravitational waves and now neutrinos -- gives us a more complete understanding of the universe, and important new insights into the most powerful objects and events in the sky. Such breakthroughs are only possible through a long-term commitment to fundamental research and investment in superb research facilities."

NSF's IceCube was built by NSF specifically to identify and track high-energy neutrinos. It sighted the first neutrinos from beyond our galaxy in 2013 and since has made numerous fundamental measurements in neutrino astronomy, which helps scientists make sense of matter in its most elementary forms.

The NSF Office of Polar Programs, which manages the U.S. Antarctic Program (USAP), and the Physics Division in its Mathematical and Physical Sciences Directorate jointly oversee the operations of NSF's IceCube, the world's largest neutrino detector.

Since they were first detected in 1912, cosmic rays have posed an enduring mystery: What creates and propels them across vast distances before they rain down on Earth? Where do they come from?

Cosmic rays are charged particles. This attribute makes tracing their paths back to their points of origin impossible, as the magnetic fields that fill space affect them, altering their trajectories. But the powerful, naturally occurring cosmic accelerators that produce cosmic rays also produce cosmic neutrinos. Neutrinos are uncharged particles, unaffected by even the most powerful magnetic fields. Because they rarely interact with matter and have almost no mass -- hence their nickname "ghost particle" -- neutrinos travel nearly undisturbed, giving scientists an almost direct pointer to their source.

The group of international researchers that made this most recent discovery traced the path of a single neutrino detected by NSF's IceCube Sept. 22, 2017 to a previously known but little-studied blazar, the nucleus of a giant galaxy that fires off particles in massive jets of elementary particles, powered by a supermassive black hole at its core. Astronomers had designated this blazar as TXS 0506+056.

The team published their results in two papers this week (July 13) in the journal Science.

"The evidence for the observation of the first known source of high-energy neutrinos and cosmic rays is compelling," said Francis Halzen, a University of Wisconsin-Madison professor of physics and the lead scientist for the IceCube Neutrino Observatory.

Equipped with a relatively new alert system -- triggered when neutrinos of very high energies crash into an atomic nucleus in or near NSF's IceCube detector -- the observatory sent coordinates to telescopes worldwide less than a minute after detection for follow-up observations.

Two gamma-ray telescopes, NASA's orbiting Fermi Gamma-ray Space Telescope -- which had already observed enhanced gamma-ray activity from the direction of the blazar during its regular scans of the entire sky every three hours -- and the Major Atmospheric Gamma Imaging Cherenkov Telescopes (MAGIC) in the Canary Islands, looked in the direction provided by NSF's IceCube. They detected a flare of high-energy gamma rays associated with TXS 0506+056. The convergence of multi-messenger observations identified the blazar as the source.

Fermi was the first telescope to identify enhanced gamma-ray activity from TXS 0506+056 within 0.06 degrees of the IceCube neutrino direction. Over a decade of Fermi observations of this source, this was the strongest flare in gamma rays, the highest-energy photons. A later follow-up by MAGIC detected gamma rays of even higher energies.

High-energy gamma rays can be produced either by accelerated electrons or protons. The observation of a neutrino, a hallmark of proton interactions, is the first definitive evidence of proton acceleration by black holes.

"Now, we have identified at least one source of cosmic rays because it produces cosmic neutrinos," Halzen said. "Neutrinos are the decay products of pions. In order to produce them, you need a proton accelerator."

The observations prove that TXS 056+056 is among the most luminous sources in the known universe and thus add support to a multi-messenger observation of a cosmic engine powerful enough to accelerate high-energy cosmic rays and produce the associated neutrinos. One of these neutrinos, out of many millions that sailed through Antarctica's ice, was captured by NSF's IceCube Sept. 22.

Following the Sept. 22 detection, the IceCube team quickly scoured the detector's archival data -- NSF's IceCube is always on and looking in all directions, including through the Earth to the sky in the Northern Hemisphere -- and discovered a flare of neutrinos from December 2014, coincident with the same blazar, TXS 0506+056, which scientists have nicknamed "the Texas source."

The crystal-clear ice beneath the South Pole provides the medium that allows NSF's IceCube to document the interaction of neutrinos with terrestrial matter. Collisions between high-energy neutrinos and atomic nuclei are very rare but produce an unmistakable signature -- a characteristic cone of blue light that is mapped through the detector's grid of 5,000 photomultiplier tubes.

When a neutrino slams into the nucleus of an atom, it creates one or more secondary charged particles, which, in turn, create the blue light. Because the charged particle and light it creates stay essentially true to the neutrino's direction, it gives scientists a path to follow back to a source.

NSF's IceCube observatory is operated by an international collaboration that includes more than 300 scientists from 49 different institutions in 12 countries. The observatory is part of the Wisconsin IceCube Particle Astrophysics Center, based at the University of Wisconsin. The center brings together scientific, engineering, computing and educational resources around the theme of particle astrophysics.

The NSF-managed USAP built and maintains the IceCube observatory in one of the world's harshest environments. The need to ship all of the components to build the detector in the holds of military cargo aircraft, as well as the development of hot-water drilling techniques required to install instruments into the ice sheet, make NSF's IceCube, which became operational in 2010, the culmination of a uniquely challenging scientific and logistical endeavor.

NSF provided approximately $242 million of the total cost of building IceCube, while other partners provided an additional $37 million. NSF also provides $7 million annually to operate and maintain the facility.

About 20 observatories on Earth and in space have participated in this discovery. The observations across the electromagnetic spectrum, listed alphabetically by project for the given wavelength, include: gamma-rays by the space missions AGILE, INTEGRAL, and Fermi and ground-based telescopes HAWC in Mexico, H.E.S.S. in Namibia, MAGIC in Spain, and VERITAS in the U.S.; X-rays, optical, and radio radiation by space missions MAXI, NuSTAR, and Swift and ground-based observatories ASAS-SN in Chile and the U.S., GTC in Spain, Kanata in Japan, Kapteyn in Spain and the U.S, Kiso in Japan, Liverpool in Spain, OVRO in the U.S., SALT in South Africa, Subaru in Japan, and VLA in the U.S; and neutrinos by ANTARES in France. These observatories are run by international teams with a total of over a thousand scientists supported by funding agencies in countries around the world. Several follow-up observations are detailed in a few other papers that are also released today.