Greenland used to be green, and here’s why that’s bad news 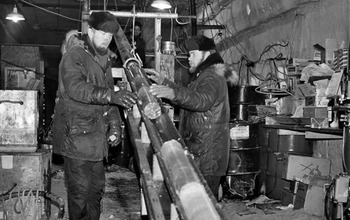 A sample of soil collected deep beneath a Cold War ice bunker in Greenland has revealed that the largest ice sheet in the Northern Hemisphere, and a remnant of the last ice age, is more susceptible to a warming climate than previously thought. Plant material from the soil shows that, during a period in which global CO2 concentrations were much lower than they are today, the ice sheet was far smaller. With 40% of the global population living within 60 miles of the coast, faster melting of land-locked ice and the sea level rise that follows is not good news.

In 1959, the US Army constructed a secret cold war bunker, dubbed Project Iceworm, within the Greenland ice sheet 120 km (75 miles) from the coast. While the project was short-lived, the unique location allowed scientists to collect a 1.4 km (4,600 foot) long ice core from beneath the bunker, including nearly 4 meters (14 feet) of frozen soil. The cores were stored first at the University of Buffalo and then in a Danish repository before they were rediscovered and analyzed by an international interdisciplinary team including several NSF-funded researchers.

In the soil, researchers were shocked to find remnants of twigs and mosses. New age-dating techniques show that the soil formed sometime between 400,000 to 1 million years ago. While the Greenland ice sheet has survived through the 12,000 years since the end of the last great ice age, the new results show that during at least one warm interglacial period, the ice sheet shrunk long enough to allow formation of soil and establishment of plants in areas long buried in ice. Warm, interglacial periods have occurred periodically over the last 2 and a half million years, associated with the large-scale melting of continental ice sheets, dramatic sea level increases of 130 meters (460 feet), and increased CO2 in the atmosphere. As a result of fossil fuel use, current CO2 concentrations exceed the highest levels over anytime during the last one million years by nearly 50%.

These results, combined with other evidence that Greenland ice is melting at unprecedented rates, suggest the prospect of a melting Greenland ice sheet, and the resulting 7.2 meters (23 feet) of sea level rise, is much more likely than previously thought, highlighting the need for finding innovative ways to mitigate the effects of carbon emissions.

NSF grants EAR-1735676, EAR-1652274, and ARC-1023191 supported this study. Samples were prepared and data generated in community facilities funded by the NSF Division of Earth Sciences.