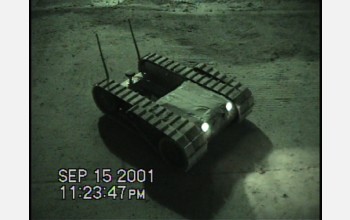 Photo of one of the search and rescue robots.

Graduate students and the experimental robots they helped to develop were among the early responders who joined the search and rescue efforts shortly after the Sept. 11 collapse of the World Trade Center towers.

Robotics expert Robin Murphy, an associate professor of computer science at the University of South Florida, was called immediately and arrived on site the morning after the collapse. Murphy's research on experimental mixed-initiative robots for urban rescue operations was originally funded by the National Science Foundation (NSF). Her response team included three graduate students--Jenn Casper, Mark Micire and Brian Minten--who helped her develop the robots and their software-guided "marsupial" systems. These intelligent anonymous "marsupial" robots are especially useful in rubble because the "mother" robot releases smaller robots to explore tight spaces unreachable by other means. The mother carries the little ones in its "pouch" into the site as far as she can maneuver, releasing and providing "power" as the "babies" descend from her to perform their search negotiating smaller crevices and hidden spaces. Equipped to maintain balance on rough terrain, the smaller team can reach, sense, and report on spaces that may be either too small or too dangerous for human rescue workers to approach or enter. The severity of the WTC damage prevented the use of the mother; instead the shoebox-sized robots were taken by backpack into the rubble.

Within minutes of the World Trade Center attack, Murphy spoke with another of her former students, John Blitch, who directs the Center for Robot-Assisted Search and Rescue (CRASAR). They expected to meet in New York under the direction of NIUSR board member Raymond Downey, chief of the fire department's special operations section. However, Downey was among the rescue workers killed when the towers collapsed.

The CRASAR team prepared its robots near Stewart Air Force Base in Newburgh, NY, where Murphy, Casper, Micire and Minten were also fitted with asbestos-rated respirators. They gained access to "Ground Zero" at 8:00 p.m. on Wednesday. Murphy, a veteran of many smaller building collapse training sessions, knew instinctively that they had little chance of finding survivors. "The firefighters were grimly determined to find their colleagues," she said. "We were all determined to find whatever was possible. If we didn't find someone alive, finding remains and ensuring rescuer safety was just as important."

Over the next 11 days, the CRASAR teams made five insertions onto the massive rubble piles, often interrupted when safety concerns forced an evacuation. The hardiest of the robots--which cost between $10,000 and $40,000--were sent into the rubble whenever requested by Federal Emergency Management Agency (FEMA) task force teams or sector chiefs. The mechanized prowlers had tethers with a range of 100 feet, far out-stripping the fire department's seven-foot camera wands.

In the future, tether-free robots enabled by artificial intelligence would guide themselves through collapsed buildings or other difficult terrain, Murphy believes. She also hopes to develop algorithms that could distinguish colors and shapes to help robots locate victims, living or dead.

Before graduate school, Casper received an NSF award under Research Experiences for Undergraduates. Now she and fellow students Micire and Minten have acquired the kind of field experience none of them would have hoped for, yet none would have missed.

"This was the worst thing I or anyone else has seen in the field," Murphy said. "It says a lot for my students that they rose to the challenge. Now we'll take these lessons home, with new inspiration to make our next generation of search and rescue robots as advanced as possible."

Related Websites
For more about Robin Murphy's research, including photos from the WTC site, see:: http://www.crasar.org