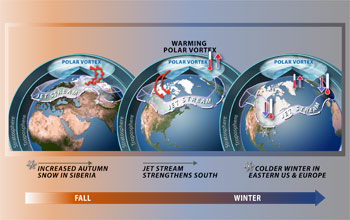 Snow cover in Siberia has been linked to U.S. winter temperatures.

Scientists have verified the accuracy of a model that uses October snow cover in Siberia to predict upcoming winter temperatures and snowfall for the high- and mid-latitudes of the Northern Hemisphere.

"sCast works well in accurately predicting winter conditions over much of the eastern United States and Northern Eurasia," said Jay Fein, program director in the National Science Foundation (NSF)'s Division of Atmospheric Sciences, which funded the research. "Dynamical model prediction of winter climate remains a formidable challenge, and statistical approaches such as Cohen's continue to be a valuable alternative."

The results are published this week in the American Meteorological Society's Journal of Climate.

Cohen and colleagues outline the link between October snow cover in Siberia and the Northern Hemisphere's winter temperatures, and snowfall.

October is the month when snow begins to pile up across Siberia. October is also the month that the Siberian high, one of three dominant weather centers across the Northern Hemisphere, forms.

In years when Siberian snow cover is above normal, a strengthened Siberian high and colder surface temperatures across Northern Eurasia develop in the fall.

"The result is a warming in Earth's stratosphere that occurs in January," said Cohen. "This eventually descends from the stratosphere to Earth's surface over a week or two in January, making for a warmer winter in Northern Hemisphere high latitudes. However, in mid-latitudes it turns colder, so winters in the northeastern U.S. and eastern Europe are likely to be colder and snowier than normal. The skill of the sCast model takes us the next step beyond current seasonal forecast models employed worldwide."