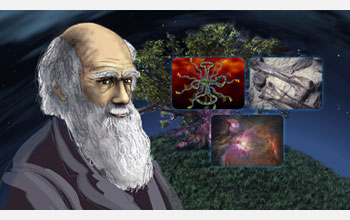 Charles Darwin's work impacted many sciences including biology, anthropology, and even astronomy.

View a video of researchers discussing the impact of "Origin of Species" and a video interview with Dr. Mohamed Noor.

What questions are more profound and provocative than:

These and other questions--which are as timely, controversial and news-worthy as ever--are addressed in a new, free, online special report released by the National Science Foundation entitled Evolution of Evolution: 150 Years of Darwin's "On the Origin of Species." The report is posted at http://www.nsf.gov/news/special_reports/darwin.

Honoring the 150th anniversary of Charles Darwin's Origin of Species, Evolution of Evolution: 150 Years of Darwin's "On the Origin of Species" is a multi-disciplinary one-stop-shop of resources on evolution and Darwin himself that are available nowhere else--including eye-catching graphics; captivating interviews and essays by a team of international evolutionary experts; fast-read texts; a timeline that neatly summarizes major intellectual and technological achievements that advanced our understanding of evolution; and downloadable documents.

Going wide and deep, Evolution of Evolution: 150 Years of Darwin's "On the Origin of Species" provides a uniquely sweeping, at-a-glance explanation of how "Origin" cut an intellectual swath through anthropology, biology, the geosciences, polar sciences and even astronomy, and why it likely will continue to serve as the organizing framework for the sciences into perpetuity.

As Evolution of Evolution: 150 Years of Darwin's "On the Origin of Species" enlightens audiences about the marvelous scientific advances enabled by the theory of evolution, it also entertains by covering the hot-tempered criticisms, longstanding hoaxes, and dedicated scholarship inspired by Origin.

Chock-full of illuminating and surprising stories and facts that are packaged in easy-to-understand formats, Evolution of Evolution: 150 Years of Darwin's "On the Origin of Species" is ideal for audiences of all levels- including reporters, general readers, teachers, parents and students of all levels. It's perfect for organizations addressing evolution, researchers, and publications targeting students, and anyone else who is interested in the evolution history of life on Earth and the potential for future discoveries about life in the solar system.