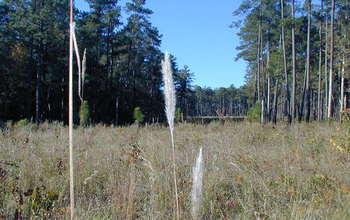 An experimental forest in S.C. where plants, bees and other species move from place to place.

An extensive study of global habitat fragmentation--the division of habitats into smaller and more isolated patches--points to major trouble for the world's ecosystems.

The study shows that 70 percent of existing forest lands are within a half-mile of forest edges, where encroaching urban, suburban and agricultural influences can cause harmful effects such as losses of plant and animal species.

The research also tracks seven major experiments on five continents that examine habitat fragmentation and finds that fragmented habitats reduce the diversity of plants and animals by 13 to 75 percent.

The largest effects are found in the smallest and most isolated fragments of habitat.

Results of the study, which involved two dozen researchers across the globe, are reported in a new paper published in Science Advances.

The work is funded by the National Science Foundation (NSF).

"The results are stark," said Doug Levey, program director in NSF's Division of Environmental Biology and a co-author of the paper. "No matter the place, habitat or species, habitat fragmentation has large effects, which grow worse over time."

The scientists assembled a map of global forest cover and found very few forest lands unencumbered by some type of human development.

"It's no secret that the world's forests are shrinking, so we asked about the effects of this habitat loss and fragmentation on the remaining forests," said Nick Haddad, a biologist at North Carolina State University and corresponding author of the paper.

"The results were astounding," he said.

"Nearly 20 percent of the world's remaining forests are the distance of a football field--or about 100 meters--away from forest edges. Seventy percent of forest lands are within a half-mile of forest edges. That means almost no forests can really be considered wilderness."

Covering many ecosystems, from forests to savannahs to grasslands, the experiments combined to show a disturbing trend.

Fragmentation changes how ecosystems function, reduces the amounts of nutrients retained and the amount of carbon sequestered and has other deleterious effects.

Negative effects of fragmentation and help for the forest

"The initial effects were unsurprising," Haddad said. "But I was blown away by the fact that these negative effects became even more negative with time. Some results showed a 50 percent or higher decline in plant and animal species over an average of just 20 years.

"And the trajectory is still spiraling downward."

Haddad points to some possible ways of mitigating the effects of fragmentation: conserving and maintaining larger areas of habitat; using landscape corridors, or connected fragments that are effective in maintaining higher biodiversity and better ecosystem function; increasing agricultural efficiency; and focusing on urban design efficiencies.

"This study is a wake-up call to how much we're affecting ecosystems--including areas we think we're conserving."