In a desert seared by climate change, burrowers fare better than birds 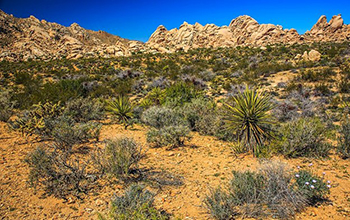 In the arid Mojave Desert, small burrowing mammals such as the cactus mouse, the kangaroo rat and the white-tailed antelope squirrel are weathering the hotter, drier conditions triggered by climate change much better than their winged counterparts, finds a new study published in Science and funded by the U.S. National Science Foundation.

"The take-home message is that a warming climate can have severe effects on some desert animals but not others," said Doug Levey, a program director in NSF's Division of Environmental Biology. "Understanding such differences is an important first step in ecosystem management."

Over the past century, climate change has continuously nudged the Mojave's searing summer temperatures ever higher, and the blazing heat has taken its toll on the desert's birds.

However, the same team that documented the birds' decline has now found that small mammal populations in the desert have remained relatively stable since the beginning of the 20th century.

"We're finding that animals have diverse strategies for reducing their exposure to hot and dry conditions that could kill them," said study senior author Steven Beissinger, an ecologist at the University of California, Berkeley.

Using computer models to simulate how birds and mammals respond to heat, UCBerkeley researchers and their colleagues showed that small mammals' resilience is likely due to their ability to escape the sun in underground burrows and their tendency to be more active at night.

As a result of these behaviors, small mammals have much lower "cooling costs" than birds, which have less capacity to escape the desert heat and need extra water to maintain a healthy body temperature.

"It's becoming clear that animals across the planet are responding to climate change by shifting where they live and shifting when they breed, and we're starting to get really strong evidence of population declines in certain areas that may be associated with warming," said lead author Eric Riddell, an ecologist at Iowa State University. "Some estimates now suggest that one in six species will be threatened by climate change over the next century. Figuring out which species those are, and what kind of traits they have, is critical."