Geomagnetic Landmarks Give Turtles Sense of Where They Are, Where to Go

How sea turtles navigate across vast expanses of featureless ocean to reach feeding and breeding sites has long been a mystery. Now, clues are surfacing to indicate turtles rely partly upon invisible landmarks created by the Earth’s magnetic field. 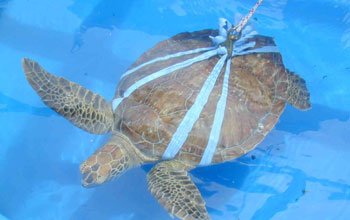 The turtles were placed into cloth harnesses and tethered to limit their travel.

How turtles navigate across vast expanses of seemingly featureless ocean to reach distant feeding and breeding sites has long been a mystery of the seas. Now, clues are surfacing to indicate sea turtles rely at least partly upon an invisible map of landmarks created by the Earth's magnetic field.

While technological global positioning systems process signals from satellites, the turtles' system draws upon variations in Earth's magnetic field, which give each geographic area a distinctive magnetic pattern. New research shows that sea turtles can apparently detect and distinguish among the magnetic fields in different locations, enabling them to compile a "magnetic map" for navigating to specific feeding and nesting areas.

The findings, reported in the April 29, 2004, issue of Nature, may enhance conservation efforts to protect endangered turtle species and suggest new methods of human navigation, according to the researchers. The study was led by University of North Carolina marine biologists Kenneth and Catherine Lohmann along the Atlantic coast of Florida and was supported by a $413,000 grant from the National Science Foundation.

As newly hatched turtles leave the beach and enter the sea for the first time, they use the earth's magnetic field and the direction of ocean waves as crude compasses to guide them offshore into deeper waters favorable for growth and development. The young turtles, however, use the field primarily as a source of directional information for maintaining a heading.

"Older turtles," Lohmann said, "learn to use magnetic-field information in a far more sophisticated way, as a kind of map that can be used to pinpoint specific areas.  It's as if turtles have their own GPS based on magnetism."

According to Michael Greenfield, a director with NSF's Animal Behavior Program, "Older turtles would need a more accurate map, as they must do more than simply orient seaward and enter a current. They have to find a specific beach on which to land, mate, and -- for females -- lay eggs. This all demands considerable accuracy in orientation."

The Lohmanns' research suggests that mature turtles can distinguish very minor differences in the magnetic field found in different locations, and then make the appropriate course corrections while still far out to sea, he said.

"The discrimination of magnetic field characteristics that would be required to do this is truly mind-boggling," said Greenfield, "but this work indicates that the turtles can do it."

To determine if turtles, at several years old, possess a magnetic map detailed enough to direct them toward a specific site, the Lohmanns and their colleagues built a special cube-shaped magnetic coil system approximately the size of a two-story house to surround a circular plastic pool. The coil could reproduce the magnetic fields that exist in different locations along the southeastern U.S. coast. Green sea turtles (Chelonia mydas) captured from a nearby coastal feeding ground were placed in the pool and observed as they adjusted their swimming direction upon exposure to various magnetic fields.

When the turtles were exposed to a magnetic field characteristic of a coastal area about 209 miles north of their homes, they invariably swam southward. In contrast, turtles exposed to a field that exists an equivalent distance to the south responded by swimming northward.

The findings showed that turtles can distinguish between the magnetic fields that characterize different geographic locations. Moreover, turtles responded to the magnetic fields by orienting themselves in a direction that would have led them towards the capture site had they been where each magnetic field naturally occurs.

It is not yet understood how turtles detect magnetism, nor exactly how they derive a navigational map from it. Maybe they combine magnetic cues with coastline features. Maybe they derive location coordinates from a set of two magnetic factors, such as intensity and inclination. Maybe they sense slight variations in the rate of change in the magnetic field, much like a hiker reads tightly spaced lines on a topographic map to discern a distinctive canyon.

"No one knows for sure how any animal senses magnetic fields," Kenneth Lohmann said. "Crystals of magnetite (the same mineral used in compass needles) have been detected in turtle heads, but there is not yet clear evidence for a link between the magnetite and the nervous system."

As these are endangered species, he said, invasive methods of physiological study are not appropriate.

Understanding how magnetic fields influence turtle travel could help biologists assess how migratory marine life can be affected by human activities that create anomalies in the ocean's magnetic fields. Such anomalies can be introduced by underwater electrical cables, oil rigs, sea walls with iron framing and coastal condominiums, Lohmann said. Even the metal-wire cages that protect sea turtle nests from raccoons alter a magnetic field somewhat. "Whether that matters, nobody can say," he said.

Lohmann speculates that hatchling turtles may imprint on the magnetic field of their home beach and, if so, such a phenomenon could be the basis of strategies for species preservation.

"It has proven difficult to re-establish sea turtles in areas where they've been eradicated," he said. "If we could somehow get turtles to consider such areas home (perhaps by exposing emerging hatchlings to the magnetic fields of locations where former colonies nested), it may be possible to re-establish some populations."
-- Sean Kearns