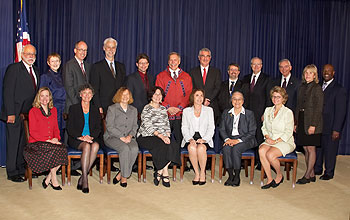 Recipients of the 2004 Award for Excellence in Science, Mathematics and Engineering Mentoring.

Today, President Bush announced the recipients of the 2004 Presidential Award for Excellence in Science, Mathematics and Engineering Mentoring (PAESMEM)—a program supported and administered by the National Science Foundation (NSF).  Each award includes a $10,000 grant for continued mentoring work.

PAESMEM honors individuals and institutions that have enhanced the participation of underrepresented groups—such as women, minorities and people with disabilities—in science, mathematics and engineering education at all levels.  Since its inception in 1996, the PAESMEM program has recognized 87 individuals and 67 institutions.  Each year's awardees add to a widening network of outstanding mentors in the United States, assuring that tomorrow's scientists and engineers will better represent the nation's diverse population.  This year, nine individuals and five institutions received the award.

The 2004 individual awardees are drawn from institutions across the country and represent a variety of professional fields.  All are highly regarded mentors and have pioneered innovative and resourceful programs to broaden opportunities in science, math and engineering for underrepresented students at all levels.

Lenore Blum of Carnegie Mellon University helped pioneer the Expanding Your Horizons program at Mills College in 1973.  The program—designed to introduce young female students to women in science and related careers—has since gone national through the Math/Science Network.  Blum's leadership has also been instrumental in transforming the culture of computing at Carnegie Mellon to embrace diversity as critical for the field and future of our nation and by creating a model mentorship organization, Women@SCS, for women students in computer science.

Charlena Grimes of Washington State University has helped improve the school's engineering and architecture department's retention rate by 20 percent through the Bridge Program.  Nearly half of the more than 663 underrepresented students that have participated in the program attained a degree in science, mathematics, engineering and technology.  She developed the Transferable Integrated Design Engineering Education and the Native Youth Exploring Engineering programs and has helped form student chapters of national engineering organizations on campus to create professional development opportunities for her students.  Washington State grants 75 percent of Bridge program participants college degrees as compared to non-Bridge students who graduate at a 67 percent rate.

Richard Ladner of the University of Washington pioneered computer networking for the deaf-blind using large print and paperless Braille displays. He is dedicated to increasing the number of students with disabilities who will pursue graduate degrees.  Ladner's mentoring efforts extend beyond the University, reaching students at the high school level.  He is also a strong advocate for women in science and engineering and supporter of NSF's ADVANCE program.

Jeffrey Russell of the University of Wisconsin, Madison, creates opportunities for women and minorities to participate in national forums on diversity and mentoring through the Construction Engineering and Management Program, which he chairs.   His mentoring of female engineering students encourages their participation in construction engineering and management—an area where women are underrepresented.  Russell sponsors student's extracurricular activities and helps them find employment after graduation.

Herb Schroeder of the University of Alaska Anchorage mentors students from local communities of indigenous peoples. Lacking abundant resources, Dr. Schroeder has raised the money to fund programs that energize students at all educational levels and attract impressive numbers of participants.  He draws enrollees from villages where some are still living at subsistence levels.  His "long-house" project integrates science and technology with the local culture, demonstrating sensitivity to the rich, unique history that is not always well understood by outsiders.

John Warner of the University of Massachusetts, Lowell, teaches innovative and popular chemistry classes—including a "green" chemistry course that is considered to be a magnet for students.  He has secured grants from numerous sources to support student research programs.  Warner's guidance and peer mentoring programs have influenced many underrepresented minority students and a high percentage of them not only earn college degrees, but also proceed to graduate school.

Steven Watkins of Louisiana State University and A&M College is considered an indispensable force in programs that produce the largest number of African-American chemistry doctorates of any university in the country.  While credited with the success achieved in the improved graduation rate, his role is also felt in recruitment, retention and outreach activities, as well as advising other LSU departments on their efforts.  He has also helped graduates find gainful employment in the academic, governmental and corporate sectors.

Elizabeth Yanik of Emporia State University (Kansas) is considered a passionate teacher who directs and sustains a half dozen mentoring programs at the school.  Her MASTER IT program is a week long residential summer program engaging girls (grades 8 and 9) in mathematics and science activities on the ESU campus.   Her Interdisciplinary Science and Mathematics provides ESU students with opportunities for early research experiences.  Participants include students majoring in biological sciences, physical sciences, mathematics and computer science.

Five institutional awards are going to organizations with programs directed to Latino and Native American students, women and minorities in biological sciences and underrepresented groups seeking mathematics doctorates.  They are:

The American Society for Cell Biology (ASCB) has developed a number of programs aimed at increasing diversity in research and education and providing professional and career development opportunities for women and minority students.  More than 2,000 students and faculty participate in the society's programs, which use technology to connect participants with well-known scientists, including Nobel Laureates and national policy leaders.

The Department of Mathematics at University of Iowa is the largest single awarder of math doctorates to minorities in the nation.  Articulated less than ten years ago, Iowa's commitment to increasing the numbers of minority graduate students has resulted in a well-crafted recruiting campaign to convince students that the environment is a supportive one.  A standing committee has responsibilities from student admissions to monitoring their progress.  Alliances with other institutions including, but not restricted to those serving minority students, has resulted in substantial support from external grants and new and continuing collaborations with minority faculty elsewhere.  Currently, the department has 21 percent underrepresented minority graduate students. It is ensuring continuity by institutionalizing structures, thereby permitting the growth of a community where organizations work together.

The Miami Museum of Science, Inc., has directed mentoring programs to youth from challenging economic and social circumstances, primarily representing African-American and Chicano/Latino families.  The museum's science programs supplement traditional science curriculum, using hands-on projects, field trips and internships.  Museum staff members recruit and train individual and volunteer professional mentors (university professors, graduate and undergraduate students, etc.) from varied scientific careers who reflect the ethnic, cultural and gender characteristics of the youth participants.  Over 1,000 youth have participated in the programs and 96 percent of them go on to college, with 60 percent pursuing science, technology, engineering and mathematics-based majors or careers.  Enhanced student accomplishment on local and national standardized examinations is one result indicating the academic effectiveness and impact of the museum's programs.

The Native Americans in Marine and Space Sciences (NAMSS) Program, Oregon State University, has had active mentoring activities and research internships designed to increase participation from members of underrepresented groups, particularly Native Americans. Programs help these students obtain degrees in science, technology, engineering and mathematics-based fields, many of whom go on for graduate study.  As part of the College of Oceanic and Atmospheric Sciences, NAMSS programs have focused on a demographic of American society that has had an acute need for mentoring activities.  The programs are so successful that many organizations seeking to develop their own mentoring programs in mathematics, science, engineering and technology, are replicating them.

The Society for the Advancement of Chicanos and Native Americans in Science (SACNAS) has established an array of mentoring activities at scientific meetings, teacher workshops, and through its own annual conference. It engages in broad partnerships with other professional organizations.  The society provides and supports opportunities for students to strengthen their presentation skills, self-confidence and to make connections with scientists.  Recently established and expanded student chapters have brought to 2,862 the number of student members, which should broaden the organization's reach.  An ongoing project to develop biographies of Hispanic/Latino and Native American scientists serves as an inspiration to students from these populations.