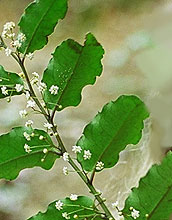 The plant species, Amborella trichopoda, which first appeared on Earth 130 million years ago, has a unique reproductive structure--evidence this so-called "living fossil" may represent a crucial link between modern flowering plants and their predecessors.

William Friedman, an evolutionary biologist at the University of Colorado at Boulder, used a combination of laser, fluorescence and electron microscope images to discern that a structure that houses the Amborella egg is different from any other flowering plant and is reminiscent of more ancient plant lineages. Friedman's study appears in the May 18 issue of Nature.

Today, scientists have catalogued about 300,000 species of flowering plants living on Earth. Understanding their rapid appearance and rise to dominance has perplexed scientists ever since Charles Darwin first referred to it as an "abominable mystery" 130 years ago.

William Winner, the National Science Foundation program manager who oversees Friedman's research said, "By studying this ancient plant species in the context of its relatives--both living and extinct--Friedman is clarifying the basic elements of evolutionary theory. This study has provided another clue to solve Darwin's mystery."

For more information on this work, see the University of Colorado at Boulder press release.