Cause of terrorism may not be linked to poverty 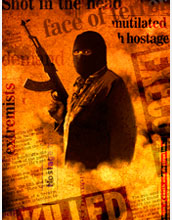 Terrorism is motivated by political freedom more than economic conditions according, to a new study.

"There is no significant relationship between a country's wealth and level of terrorism once other factors like the country's level of political freedom are taken into account," says Alberto Abadie, public policy professor at Harvard University's Kennedy School of Government.

The finding comes despite several international meetings designed to address issues of terrorism and poverty. For example, in March 2002, leaders from more than 50 nations met at a development summit in Monterrey, Mexico to call for more aid to poor countries to help eliminate extreme poverty as a motivation for terrorism.

Michael K. Moore, then the head of the World Trade Organization, reportedly told delegates, "Poverty in all its forms is the greatest single threat to peace, security, democracy, human rights and the environment."

But Abadie says the big takeaway from his study for policymakers is that although development aid is important, it is not clear that it is an effective tool for reducing terrorism, at least not in the short-run. He says more attention should be paid to political freedom because it "correlates with terrorism, but in a complicated way."

"Nations with very high or very low levels of political freedom tend to experience little terrorism," says Abadie. He points to North Korea as an authoritarian country with a low level of terrorism. He speculates that the repressive tactics used to eliminate political dissent may help keep terrorism at bay.

Abadie couldn't say whether recent U.S. actions in Iraq would eliminate terrorism in the long run as that country transitions to a new government with presumably more political freedom.

"People say ‘poverty breeds terrorism' and that seems obvious, but when one looks at the data, it has to be questioned if it's really true," says Nancy Lutz, economics program director at NSF. "In fact, the data tell us that there's no link between poverty and terrorism, which suggests that attempts to reduce terrorism by fighting poverty will not work."

Abadie makes the point by underscoring conditions in his native Basque Country of Spain, which has endured terrorism for almost half a century as groups persistently generate violence as a way to promote Basque independence. The Basque Country is one of Spain's richest regions.

"While we may not be able to fight terrorism by fighting poverty, we do have a strong economic incentive for fighting terrorism," says Lutz, pointing out the widespread consequences of terrorist acts. "Even though the physical damage from a terrorist attack is usually confined to a small area, we can see much larger effects in the whole economy," she says.

Chicago is an example. While no one was injured in the city on Sept. 11, 2001, when terrorists attacked the World Trade Center in New York and the Pentagon in Washington, D.C., those events severely affected real estate markets in Chicago. A separate NSF-funded analysis of the area by Abadie and Sofia Dermisi of Roosevelt University in Chicago showed the attacks created a large increase in the perception of terrorist risk in Chicago's central business district and changed decisions about where high-end office tenants wanted to locate.

Abadie and Dermisi looked at three of the most distinctively tall buildings in Chicago, as well as other nearby commercial buildings and found the attacks caused a significant increase in their vacancy rates. The high vacancy rates persisted through mid-2006, the end of the study period.

"If I were a Chicago alderman," says Lutz, "I might argue from this study that zoning approval for additional extremely tall buildings is a bad idea on economic grounds."

In his research, Abadie found more than 1,700 terrorist acts occurring in 2003, as reported by the Memorial Institute for the Prevention of Terrorism were domestic incidents, where both the terrorists and their victims lived in the same country. Additionally, the database registered only 240 international terrorist acts in that year.

Abadie also found evidence that terrorist activities are more common in areas with certain geographic characteristics. Areas difficult to access like Colombia's tropical jungles or mountainous terrain like that in Afghanistan may offer safe haven to terrorist groups.

Such areas may facilitate training, and provide funding through other illegal activities, like the production and trafficking of drugs such as cocaine and opiates.