Stepping into history: Women mark 40 years of working in the U.S. Antarctic Program 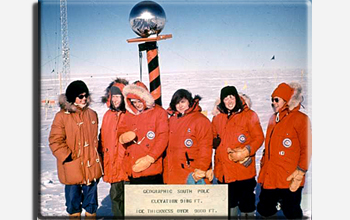 The U. S. Antarctic Program marks a significant milestone this month.  It was 40 years ago when the first women scientists from the United States were finally allowed to work in Antarctica.  On 12 November 1969, six women joined arms and stepped off the ramp of a ski-equipped Hercules LC-130 and onto the nearly two-mile-thick ice sheet at South Pole, the first time any women had been to the bottom of the planet.

The 13 November 2009 issue of the Antarctic Sun features five stories about the event.  Find links to all of the features on the page Stepping into History. Two of the main articles include:

To read more about science and related activities supported by the U.S. Antarctic Program, which is funded and managed by the National Science Foundation, subscribe to the Antarctic Sun at http://antarcticsun.usap.gov/contentHandler.cfm?id=1192.