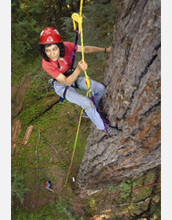 Nadkarni scales an old-growth Douglas fir tree in the Cascade Mountains to do ecological research.

The National Science Board (NSB) is pleased to announce the two recipients of its 2010 NSB Public Service Award:  scientist Nalini M. Nadkarni, and the education network called Expanding Your Horizons (EYH).

"We are pleased to recognize Nalini for her outstanding and truly unique achievements in bringing her research to the public," said Steven Beering, NSB Chairman. "Not only has she been a leader in the forest canopy research field, but she has actively engaged in forging connections with the general public and involving non-traditional audiences in scientific research."

"Similarly, we are excited to honor the Expanding Your Horizons Network in recognition of its decades-long commitment to the early development of interest in mathematics and science among young girls," continued Beering. "We are thoroughly impressed with the network's impact on the lives of hundreds of thousands of young women, having grown from a small grassroots activity to a nationwide organization."

The NSB Public Service Award honors individuals and groups that have made substantial contributions to increasing public understanding of science and engineering in the United States. These contributions may be from a wide variety of areas including mass media, education and/or training programs, entertainment, and non-profit and for-profit corporations.

"I am honored by this recognition," said Nadkarni. "I believe that the most critical problems facing society today are the widening gaps between humans and nature, and between science and society. Scientific researchers can--and should--play a role in the communication of science far beyond academia because of their passion and their knowledge of scientific topics."

Nadkarni's work epitomizes a goal of the National Science Foundation (NSF), which is to support cutting edge research that has broader impacts on society.

"Communication with colleagues is a critical part of the scientific process," said Nadkarni. "My work expands the definition of ‘colleague' to rap singers, modern dancers, and incarcerated people, who in turn provide fresh insights into the workings of nature. My vision is to turn public outreach by academics from burden to benefit."

"The Expanding Your Horizons Network is honored to receive such a prestigious award," said Stacey Roberts-Ohr, executive director of EYH. "It's wonderful to be recognized for the extensive work we do on behalf of young women and to be included in such an esteemed group of prior winners. It's rewarding to know that we have helped hundreds of thousands of young women explore STEM careers. We are grateful to our partners who coordinate EYH conferences both in the United States and globally and sincerely thank all of our terrific workshop leaders and volunteers."

The NSB Public Service Award will be presented to Nadkarni and the EYH Network at the National Science Board's annual awards dinner at the U.S. Department of State in Washington, D.C., on May 4, 2010.  Two additional awards will be presented that evening:  the NSF's Alan T. Waterman Award--to Subhash Khot of New York University--and the Vannevar Bush Award, whose recipient will be announced on March 29.

Nadkarni has long made communication with the public an integral part of her work.  In January 2010, she was awarded a grant from the Ecosystems Program at NSF to initiate her "Research Ambassador Program," which will support her efforts to recruit and train other academic scientists to carry out non-traditional science outreach.

She co-founded in 1994 the International Canopy Network, a non-profit organization that fosters communication among researchers, educators, and conservationists.  Her work consistently crosses disciplines and overcomes traditional boundaries, particularly by inviting artists to help distill and disseminate her work.  In recent years, Nadkarni invited a hip-hop singer and at-risk middle school students to her forest sites to write their own rap songs about nature, and collaborated with a modern dance company to create a dance production about rainforest conservation.  She has appeared in numerous television documentaries, and was featured as a canopy scientist in a 2001 Emmy-award-winning National Geographic television documentary on tropical forest canopies.

Nadkarni is a member of the Faculty at The Evergreen State College, in Olympia, Wash., where she teaches environmental studies. She is also an adjunct associate professor in the School of Forest Resources at the University of Washington, where she received her doctorate in 1983. Her research is on the ecology of tropical and temperate forest canopies, focusing on the roles that canopy-dwelling plants play in whole forests. Her research in Washington and in Monteverde, Costa Rica is supported by NSF and the National Geographic Society.

The Expanding Your Horizons (EYH) Network is a non-profit organization dedicated to encouraging young women to pursue science, technology, engineering and mathematics careers. The EYH Network coordinates more than 86 hands-on math and science conferences in 33 states, as well as in Thailand, China, Singapore, Malaysia, Brussels and Geneva each year. These conferences nurture middle and high school girls' interest in science and math courses, encouraging them to consider careers in science, technology, engineering and mathematics.  Since 1976, 775,000 young women have participated in EYH conferences. Many participants are now professional women scientists working in chemical and civil engineering at places like the Lawrence Livermore National Laboratory, Network Appliances and Elan Pharmaceuticals.

The NSB is the 25-member policymaking body for the NSF and advisory body to the President and Congress on science and engineering issues.  Drawn primarily from universities and industry, and representing a variety of science and engineering disciplines and geographic areas, NSB members are selected for their eminence in research, education, or public service, and records of distinguished service.  The NSB has 24 members who serve six-year terms.  The 25th member is the NSF Director, an ex officio member of the NSB. More information is available on the NSB Web site.