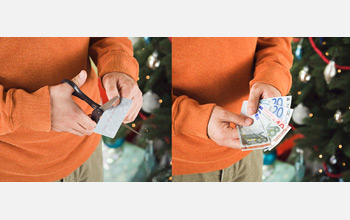 The necessity of buying gifts may overwhelm the influence of purchase pain on spending decisions.

View a video webcast with Scott Rick, marketing professor at the University of Michigan.

Every year about this time, on Black Friday, the day after Thanksgiving that traditionally begins the holiday shopping season, early-morning consumers stand in long lines eager to purchase some sought after prize. From the outside, it looks as if these holiday shoppers can't wait to plunk down their cash, but University of Michigan Marketing Professor Scott Rick says consumers often behave differently than they would ideally like to behave.

"Some consumers chronically spend more than they would like, and some consumers chronically spend less than they would like," he says. Where an individual falls within the range of desiring to spend more or less largely determines whether he or she is a tightwad or a spendthrift, characteristics that determine quite a bit about a person's spending habits.

Rick says anticipating the psychological pain that goes along with paying money drives some people to spend less than they would like, while not experiencing enough pain causes others to spend more.

While a graduate student at Carnegie Mellon University, he and a group of colleagues developed and validated a "Spendthrift-Tightwad" scale to measure stable differences in the level of pain that come from spending decisions.  He and his colleagues have since been able to observe the expected patterns of pain in the brains of tightwads and spendthrifts in fMRI experiments involving shopping tasks.

It turns out differences between tightwads and spendthrifts are greatest in situations that amplify the pain of paying.  For example, paying for an item with cash amplifies purchase pain. In these cases, tightwads spend substantially less.

But differences are smallest in situations that diminish the pain of paying such as those associated with spending money on others for gifts during the holidays. This is especially true when paying with credit cards because consumers don't immediately feel the pain associated with buying decisions.

"Tightwads and spendthrifts spend about the same amount of money on gifts," said Rick, an expert on the emotional causes and consequences of spending money. "It may be that spending money on someone else lessens the pain of making purchases. Alternatively, spending on gifts may be just as painful as usual for tightwads, but the necessity of buying gifts overwhelms the influence of that pain on spending decisions."

In a webcast sponsored by the National Science Foundation (NSF), Rick discussed spending decisions during the holidays when the pressure to buy gifts and take advantage of low prices increases. Rick is now an assistant professor of Marketing at University of Michigan's Ross School of Business. His pre-doctoral research fellowship was funded by NSF.

"The pain of paying matters most when purchases are optional," Rick said during the webcast. "Generally, gifts for loved ones are not optional, assuming we want to maintain those relationships. If grandma wants the new Obama Chia Pet, it may not matter how distressing we find the prospect of buying that tacky, over-priced tchotchke. Grandma wants it, so it goes in the cart."

But in other buying categories, differences remain sizable. Spendthrifts spend significantly more on coffee, clothes and entertainment. When paying for restaurants and hobbies, spending trends level out again.

Rick says how a spending decision is framed has a big impact on how much tightwads and spendthrifts are willing to pay. If dinner and a movie are framed as an investment in a relationship, for example, then tightwads are willing to spend more.

He says these findings are important for economic models of decision making that traditionally assume people make spending decisions based on a purely cognitive appreciation of what they forego in the future by spending today.

Rick's research has been published in marketing, economics, psychology and neuroscience journals, including the Journal of Marketing Research, the Annual Review of Psychology and Neuron.