US and UK scientists collaborate to design crops of the future 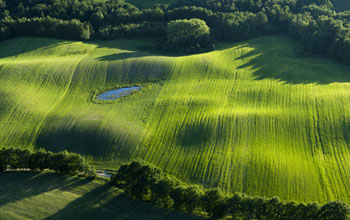 By 2015, more than 190 million tons of nitrogen will be needed to supply the world's food.

Four teams of researchers in the United States and the United Kingdom recently were awarded more than $12 million to begin a program of novel research to revolutionize current farming methods by giving crops the ability to thrive without using costly, polluting artificial fertilizers.

The four highly innovative projects encompass: an effort to use synthetic biology to create new useful components for plants; a global search for a mysterious lost bacterium with significant unique functions; work to engineer beneficial relationships between plants and microbes; and an effort to mimic ingenious strategies employed by blue-green algae.

The U.S. National Science Foundation (NSF) and U.K.'s Biotechnology and Biological Sciences Research Council (BBSRC) made the awards following an 'Ideas Lab' that focused on new approaches for dealing with the challenges of nitrogen in the growing global food demand. NSF solely awarded one of the four projects.

Plants need nitrogen to grow, and by 2015, more than 190.4 million tons of it will be needed to supply the world's food. Most farms rely on great quantities of industrially-produced, nitrogen-rich fertilizer to ensure crop yields, but doing so comes with trade-offs.

Artificial fertilizers are costly and are produced using vast amounts of fossil fuel. They also generate environmental problems from degrading soil to runoff into rivers where they pollute fresh waters and coastal zones. As a result, crops need an alternative from which they can gather needed nitrogen.

According to researchers, there is plenty of environmentally-safe nitrogen in the atmosphere, but it is unusable. Atmospheric nitrogen needs to be 'fixed', they say, meaning it needs to be converted into a form that plants can use.

With funding from both NSF and BBSRC, these projects offer technological stepping stones to do just that--reduce the need for artificial fertilizers by enabling crops to fix their own nitrogen.

"The reliance of artificial nitrogen fertilizers for food crop production and their damaging environmental effects are in many ways underestimated," said John Wingfield, NSF's assistant director for Biological Sciences. "Fortunately, there are scientists paying attention to how these artificial fertilizers can be replaced by abundant atmospheric nitrogen. NSF's investment in Ideas Lab nitrogen projects provides a unique opportunity to engage cross-disciplinary scientists and engineers to generate novel and innovative approaches to creatively address a worldwide problem."

"The outputs of the Ideas Lab have offered fresh ideas and fresh approaches to the challenge of feeding a growing population in a sustainable way," said BBSRC Chief Executive Douglas Kell. "By bringing together world-leading researchers from the U.S. and U.K., we are rethinking current farming practices. Thanks to this exciting research, farms of the future could one day produce crops that do not rely on costly and polluting man-made fertilizers."

The four Ideas Lab projects are:

This project aims to design and build a synthetic biological module that could work inside a cell to perform the function of "fixing" nitrogen for plants.

Some plant-like bacteria (cyanobacteria) are able to fix nitrogen using solar energy via specialized cellular machinery. The scientists hope to re-engineer this machinery so that it can be transferred into a new host bacterial chassis. This will require identifying and transferring the genes responsible for nitrogen fixation as well as alterations to cellular processes.

"Nature has given us a toolbox of functional units that we can use to build complex biological modules," said Devaki Bhaya of Carnegie Institution of Washington. "The goal is to use these to build a novel synthetic nitrogen fixing unit that can be transferred to other hosts and ultimately give plants new functionality. It could mean the crops of the future can make use of the nitrogen around us without needing fertilizers."

Unique bacteria, discovered in a German charcoal pit in the 90s, could hold the key to enabling plants to fix their own nitrogen. However, there is only one recorded sighting of this bacterium, which grows in toxic environments. Now, scientists will scour the fiery corners of the globe, searching Hawaiian volcanoes, American coal seam fires and German fire pits for the elusive heat-lover, in a bid to recover its lost potential.

"Rediscovering this bacterium, or ones with similar properties, would be a game-changer," said Maren Friesen lead investigator at Michigan State University. "It contains an unusual system for fixing nitrogen in the presence of oxygen, which would enable us to leap past pervasive stumbling blocks in this field. The enzyme it contains could be a missing piece in the puzzle for creating nitrogen-fixing plants."

In nature, the reaction that fixes atmospheric nitrogen into a biologically usable form requires an enzyme called nitrogenase. The enzyme is inhibited by oxygen, rendering it useless in the normal oxygenated cells of plants. While some organisms can fix nitrogen, they have to have special adaptations to limit oxygen. However, the lost bacterium has a unique nitrogenase that could fix nitrogen in oxygen-rich environments, eliminating the requirement for oxygen limitation. This could be extremely useful in the development of nitrogen-fixing plants.

Friesen and colleagues hope to find the original bacterial strain, as well as new oxygen-tolerant, nitrogen-fixing strains, in these seemingly inhospitable environments. The team will then study the genetics and biochemistry of these strains with an eye towards transferring oxygen-tolerant nitrogenase into plants.

Engineering Synthetic Symbiosis Between Plant and Bacteria to Deliver Nitrogen to Crops--$5.09M

Some plants have developed close symbiotic relationships with bacteria. These bacteria are held in root nodules and convert the nitrogen gas found abundantly in the air into nitrogen fertilizer that plants need for growth. Researchers hope to transfer this nitrogen-fixing process into important crops to deliver nitrogen without using artificial fertilizers.

The researchers will genetically alter a nitrogen-fixing bacteria and a simple grass species, which is similar to more complex cereals such as maize, to ensure a lock and key interaction between plant and microbe, while maximizing nitrogen fixation by the bacteria and the amount of usable nitrogen delivered to the plant.

"This research could pave the way for a 'Green Revolution' that will increase crop yields for resource-poor farmers and decrease the use and environmental impact of industrial fertilizers by wealthier farmers," said Philip Poole from England's John Innes Centre, which conducts research and training in plant and microbial science.

The project's nitrogen-fixing bacteria will be genetically tuned to respond to plant signals and nutritional needs to control the production of nitrogen fertilizer for the plant.

Once the researchers have perfected the technique, they hope to develop effective interactions between maize and nitrogen-fixing bacteria.

The goal of this NSF-sponsored project is to develop the design principles to establish nitrogen fixing ability in an oxygenic photosynthetic organism, unicellular cyanobacterium. Cyanobacteria are blue-green algae of which certain strains are capable of gathering and converting atmospheric nitrogen.

Researchers led by Washington University in St. Louis biologist Himadri B. Pakrasi will attempt to use the ingenious strategies employed by the cyanobacterium to define the minimum requirements for nitrogen fixation to occur in photosynthetic cells, including those in crop plants. The researchers will also attempt to engineer plant cells with the ability to fix atmospheric nitrogen into usable compounds.